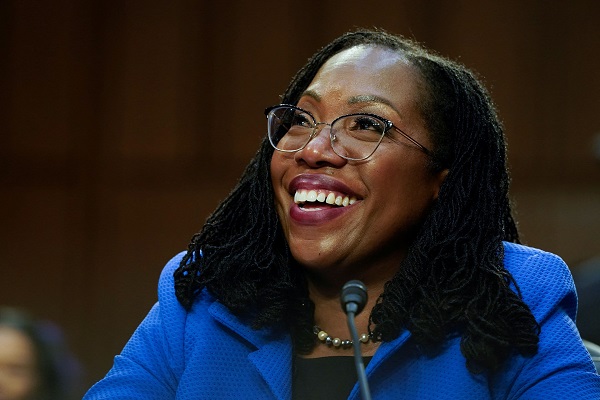 The United States Senate has confirmed Ketanji Brown Jackson’s nomination to the US Supreme Court, making her the first Black woman in the nation’s history to serve on its highest court.

The Senate confirmed Jackson’s historic nomination in a 53-47 vote on Thursday afternoon.

Beyond breaking barriers as the first Black woman on the bench, 51-year-old Jackson also is now only the third Black American ever to serve as a Supreme Court justice.

“This is a wonderful day, a joyous day and an inspiring day for the Senate with the Supreme Court and for the United States of America,” Senate Majority Leader Chuck Schumer said. “Judge Jackson is in every sense and by all measures a brilliant jurist.”

Jackson’s confirmation process highlighted deep partisan divisions in the US, with Republicans seeking to paint the longtime jurist and US appeals court judge as a “radical”, while Democrats stood staunchly behind her.

While most Republicans on Thursday voted against her joining the top court, three GOP senators – Susan Collins of Maine, Lisa Murkowski of Alaska and Utah’s Mitt Romney – voted in favour on Thursday, effectively sealing her nomination in the evenly-divided chamber.

Ideologically liberal, Jackson will be joining a court that is dominated 6-3 by conservatives. She will be replacing 83-year-old Justice Stephen Breyer, who announced his retirement in January.

Breyer had faced increased pressure to step down from the lifelong post after the death of fellow liberal Justice Ruth Bader Ginsburg allowed former President Donald Trump to nominate his third nominee to the bench – Amy Coney Barrett.

Barrett was confirmed by the then-Republican-controlled Senate in the waning days of Trump’s presidency.

While justices on the Supreme Court are meant to be apolitical, confirmation hearings have become politically fraught affairs.

Republicans spent the hearings interrogating Jackson’s sentencing record on the federal bench, including the sentences she handed down in child pornography cases, which they argued were too light. They also sought to paint her as radically left-wing in her judicial opinions.

“When it came to one of the most consequential decisions a president can make – a lifetime appointment to our highest court – the Biden administration let the radicals run the show,” Senate Republican leader Mitch McConnell said.

But Democrats and Jackson said she was in line with other judges in her decisions.

“I have been a judge for nearly a decade now, and I take that responsibility and my duty to be independent very seriously,” Jackson said during the hearings. “I decide cases from a neutral posture. I evaluate the facts, and I interpret and apply the law to the facts of the case before me, without fear or favour, consistent with my judicial oath.”

She told legislators her life had been shaped by her parents’ experiences with racial segregation and civil rights laws that were enacted 10 years before she was born.

With her parents and family sitting behind her, she told the panel that her “path was clearer” than theirs as a Black American.

Jackson attended Harvard University, served as a public defender, worked at a private law firm and was appointed as a member of the US Sentencing Commission in addition to her nine years on the federal bench.

Senator Ed Markey, a Massachusetts Democrat, said on Thursday that Jackson was an “inspiration”.

“I am proud to have cast my vote in support of the historic confirmation of Justice Ketanji Brown Jackson. Congratulations Justice Jackson. You are an inspiration to us all and will bring a sorely needed perspective and voice to our nation’s highest court,” he wrote on Twitter.

MoveOn, a progressive US advocacy group, also welcomed her confirmation as “a historic moment for our country and the ongoing fight to ensure that justice is equal under the law”.