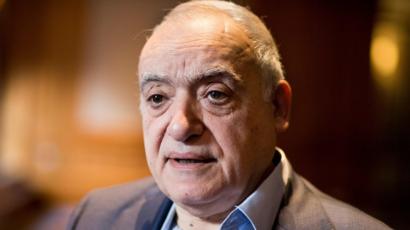 On the eve of peace talks in Berlin, Mr Salamé said foreign support of proxy groups in the conflict had created a "vicious cycle" of violence.

But Mr Salamé told the BBC that he was optimistic about the negotiations.

It comes after nine months of conflict between the powerful General Khalifa Haftar and the UN-backed government in the capital Tripoli.

A truce was announced earlier this month between Gen Haftar and the Government of National Accord (GNA).

But both sides blame each other for reported breaches of the agreement, and attempts to broker a lasting ceasefire broke down last week at a summit in Moscow.

On Saturday, forces loyal to Gen Haftar blocked oil exports from several major Libyan ports. The move is a damaging blow to the country's main source of income, a day before renewed peace talks begin.

What did Ghassan Salamé say?

He said such actions created "a vicious circle where their proxies call for intervention in their fight, and their own ambitions bring more divisions."

The role of foreign states in the conflict has come into focus in recent months, with Turkey passing a controversial law to deploy troops to help GNA forces in Tripoli.

Sunday's summit aims to extract a pledge from foreign powers to honour a UN arms embargo on Libya, and to halt any further interference in the conflict.

The meeting will bring the two sides together, along with their foreign backers, the UN and other global powers, including Russia's President Putin and Turkish President Recep Tayyip Erdogan.

Mr Salamé told the BBC that a political solution to the conflict was best for all parties involved because Libya - with its vast geography, strong local identities, heavily-armed population and weakened government infrastructure - was a difficult country for one group to control.

"Most of the national interests of all these countries, especially big [commercial] contracts and oil contracts, even geopolitical demands, can be accommodated by a peaceful and prosperous Libya, much better than a divided and war-torn country," he added.

What is the current situation in Libya?

Libya has been wracked by conflict since the 2011 uprising which ousted long-time strongman Muammar Gaddafi.

Gen Haftar's LNA controls much of eastern Libya, and last April he launched an offensive against the country's rival government in Tripoli.

His forces have so far been unable to take the city, but earlier this month the LNA captured Libya's country's third-biggest city, Sirte.

According to the UN, the fighting has killed hundreds of people and displaced thousands more from their homes.