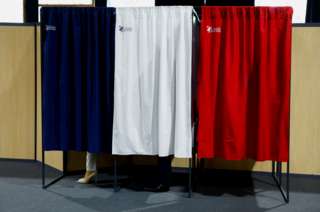 Such a low turnout figure has not been registered at this stage since 1969, BFMTV reports; it is also lower than the turnout at the same time two weeks ago in the first round of the election on 10 April when it was around 65%, BFM says. Five years ago it was 65.3% at this time.

Turnout four hours into voting at midday was slightly down compared to the same point in 2017 at 26.4%.