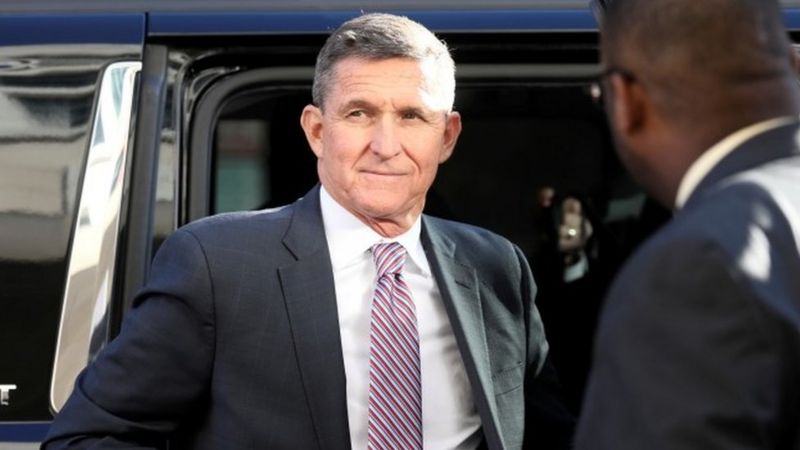 US President Donald Trump has pardoned his former national security adviser Michael Flynn, who pleaded guilty to lying to the FBI.

The president said the widely expected act of clemency was his "Great Honor".

Mr Flynn was among former aides to President Trump convicted during a justice department investigation into alleged Russian election interference.

He admitted in 2017 to lying to the FBI about contacts with Russia's envoy, then tried to withdraw his plea.

The White House said on Wednesday that the pardon would finally end "the relentless, partisan pursuit of an innocent man".

Its statement described Mr Flynn as "the victim of partisan government officials engaged in a co-ordinated attempt to subvert the election of 2016".

Mr Flynn responded by posting a tweet containing a US flag emoji and a Biblical verse, Jeremiah 1:19.

The verse says: "'They will fight against you but will not overcome you, for I am with you and will rescue you,' declares the Lord."

Mr Flynn's supporters see him as the victim of a political vendetta by the outgoing Obama administration to de-legitimise the incoming Trump administration with unsubstantiated claims of Russian collusion.

A 22-month justice department investigation concluded in 2019 there was no evidence to establish that Mr Trump or any of his associates had conspired with the Kremlin to win the 2016 election.

Who is Michael Flynn?
The retired US Army three-star lieutenant general was an early and ardent supporter of Mr Trump during the 2016 campaign, though he had been a life-long Democrat before.

Mr Flynn was among the new president's first appointments - Mr Trump brought him on just days after winning the election.

The two saw eye-to-eye on many issues, including the advantages of closer ties with Russia, renegotiating the Iran deal and combating the threat from Islamic State militants.

But he lasted just 23 days as national security adviser, the president's chief counsellor on international affairs and defence.

Mr Trump fired him after it emerged that he had discussed lifting sanctions on Russia with Moscow's ambassador to Washington before Mr Trump took office, and misled the vice-president about that conversation.

Although he initially agreed to co-operate with prosecutors, Mr Flynn asked to withdraw his guilty plea in January this year, arguing he had been duped into the agreement.

The Department of Justice had sought for his charges to be dropped, prompting a legal battle that ran for much of 2020, Mr Trump's pardon clears Mr Flynn of the whole case.

Who else has Trump pardoned or commuted?
Pardons wipe out a conviction while commutations lessen the punishment - both are clemency rights granted to the president by the Constitution.

It is common for outgoing presidents to issue pardons.

Mr Trump currently has the least number of pardons and commutations of any modern US president, according to the Pew Research Center. His predecessor Barack Obama granted 212 pardons and 1,715 commutations - the most since President Harry Truman.

Here are some of the big names from the 28 pardons and 16 commutations Mr Trump has issued so far:

Roger Stone, a long-time ally, who was convicted last year of lying to Congress and witness tampering. He had his prison sentence commuted

Former vice-president Dick Cheney's chief of staff Scooter Libby, who was found guilty of lying about leaks to the media, was also pardoned

Women's voting rights pioneer Susan B Anthony, who was convicted of illegal voting and fined in 1873 was granted a posthumous pardon

Crystal Munoz, Judith Negron and Tynice Hall, three mothers of young children who were serving sentences for drug and white-collar crimes and whose cases were brought to the president by Kim Kardashian, had their sentences commuted

US media report that a number of Trump allies are also hoping for clemency in the days to come, including ex-advisers Rick Gates and George Papadopoulous, who were both convicted in the Mueller investigation.

Republicans described Mr Flynn as a hero who suffered an unfair prosecution.

South Carolina Senator Lindsey Graham said: "General Flynn was NOT a Russian agent. Instead, he was the victim of a politically motivated investigation and prosecution where the ends justified the means."

In the US House of Representatives, Republican minority leader Kevin McCarthy tweeted: "What happened to @GenFlynn was a national disgrace. No American should ever be targeted for simply belonging to a certain political party."

But Democrats swiftly condemned the move.

House Speaker Nancy Pelosi said in a statement: "Sadly, this pardon is further proof that Trump plans to use his final days in office to undermine the rule of law in the wake of his failed presidency."