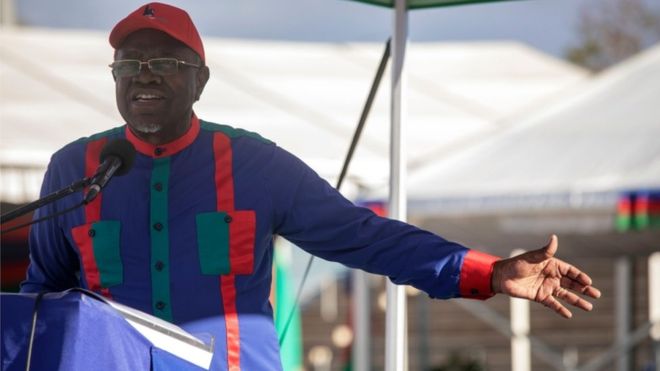 Namibia's President Hage Geingob has been re-elected for a second term, the country's electoral commission says.

Mr Geingob polled 56.3% in Wednesday's election, well ahead of his nearest rival Panduleni Itula with 29.4%.

However, Mr Geingob's tally was well down from the 87% with which he won his first term in 2014.

He went on social media to thank Namibians for returning him to office, promising to bring tangible improvements to their lives.

His Swapo party has ruled Namibia for nearly three decades since it gained independence from South Africa.
The sparsely-populated country has suffered from economic recession, hit by serious drought and low prices for its main mineral exports, diamonds and uranium.

The Bank of Namibia is predicting a third year of recession, with the economy due to shrink by 1.7% in 2019.

Swapo has also been hit by a fisheries scandal, with two former ministers under arrest for allegedly taking bribes to give licences to the Icelandic fishing firm Samherji. 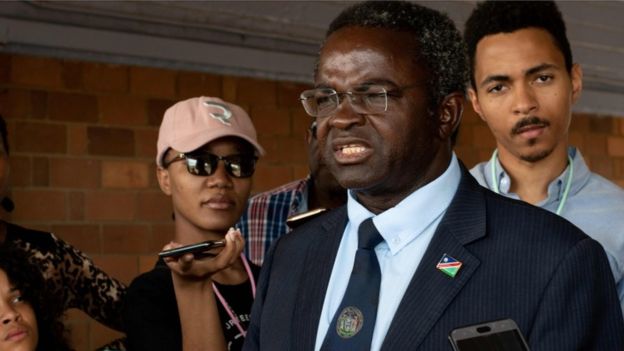 Panduleni Itula was the president's main challenger, although both are Swapo party members

Parliamentary setback
"I am just a proud Namibian that we could have free and fair elections, no fighting, no attacking each other, free movement was allowed," said President Geingob after the result was announced.

His main rival Mr Itula is also a Swapo member, but stood as an independent,

He said he was considering legal action over what he called "anomalies and irregularities" in the election.

Namibia uses electronic voting machines, and Mr Venaani went to court shortly before the election, arguing they were open to manipulation. The court, however, rejected his case.

In parliamentary elections, Swapo lost its two-thirds majority in the 96-member chamber, winning 63 seats instead of its previous 77.

The PDM won 16 seats, increasing its total by 11.
Source: BBC