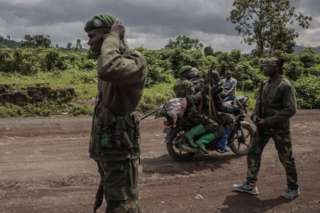 Democratic Republic of Congo President Felix Tshisekedi has said “there’s no doubt” that Rwanda supported M23 rebels in clashes in the east of his country that have displaced tens of thousands.

Rwanda has consistently denied accusations of backing the rebels.

On Monday, there was renewed fighting between the Congolese army and the rebels in Rutshuru area.

An M23 spokesperson said the army started bombarding their positions in Jomba area early in the morning.

Mr Tshisekedi's claims on Rwanda's meddling were his first in recent times as tensions continue to rise between the eastern Africa neighbours.

The president spoke on Sunday after visiting neighbouring Congo-Brazzaville where he met his counterpart Denis Sassou Nguesso.

He emphasised that although he wanted peace with Rwanda, DR Congo's neighbours “should not mistake our desire for peace with weakness”.

"I hope that Rwanda has learned this lesson because today, it's clear. There is no doubt Rwanda has supported the M23 to come and attack the DRC," he said.

A Rwanda government spokesperson has told the BBC that this “is an internal crisis that Rwanda is not involved in” .

Last Monday, M23 rebels retreated from areas it had captured in the Congolese province of North Kivu. But on Friday it warned that the army was planning renewed attacks against its positions.

In May, nearly 100,000 people fled their homes as the army clashed with the rebels near Goma town, the provincial capital.