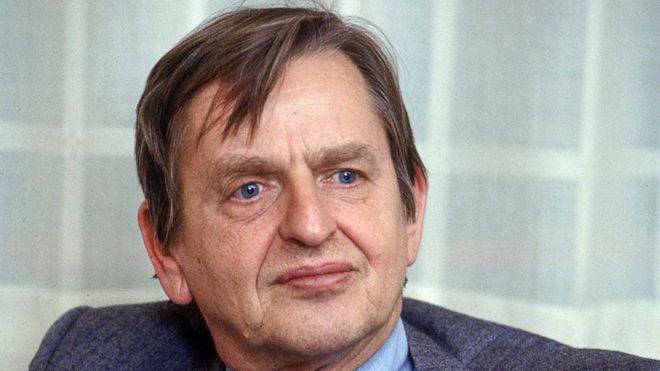 They said it was Stig Engstrom, a graphic designer known as "Skandia Man" who killed himself in 2000.

As a result they were closing the investigation into Palme's death, Chief Prosecutor Krister Petersson said.

Palme was shot in the back as he walked home from the cinema with his wife in Stockholm.

He had already dismissed his security team for the day. The assassination took place on Sweden's busiest road and more than a dozen witnesses saw a man fire the shots before fleeing the scene.

Palme's son Marten told Swedish radio that he believed prosecutors had reached the right conclusion and were right to close the case.

Thousands of people have been interviewed over Palme's death. A petty criminal was convicted of the killing but the verdict was later dismissed.

What did the prosecutor say?
"The person is Stig Engstrom," Mr Petersson told a news conference. "Because the person is dead, I cannot bring charges against him and have decided to close the investigation."

The murder weapon has not been found and no new forensic evidence has been uncovered, but prosecutors examining Engstrom's statements to police concluded that his version of events did not add up.

"How he acted was how we believe the murderer would have acted," Mr Petersson added.

Stig Engstrom had not initially been a focus for the investigation, the prosecutor said, but when investigators looked into his background they found he was accustomed to using weapons, having been in the army, and was a member of a shooting club.

In his local area he was also part of a circle of critics of Palme's policies and relatives said he had a negative view of the prime minister.

Engstrom also had long running financial problems and a growing problem with alcohol.

However investigators still did not have a "clear picture" of Engstrom's motive for killing Palme, Mr Petersson said.

Who was Stig Engstrom?
Stig Engstrom became known as Skandia Man as he had worked for the Skandia insurance company. He had been working late on the evening of the murder at the the firm's HQ close to the crime scene.

Engstrom was known to have been present at the scene of the murder. He was questioned by police several times but was quickly dismissed as a suspect.

Mr Petersson said witness descriptions of the gunman correlated with Engstrom's appearance and witnesses also contradicted Engstrom's own account of his movements at the scene.

Engstrom lied about the moments after the murder, even claiming he had tried to resuscitate Palme. He eventually killed himself in 2000.

He was first identified as a suspect by journalist Thomas Pettersson, and police started looking into Engstrom 18 years after his death.

Stig Engstrom's ex-wife told Expressen newspaper in 2018 that she had been questioned by detectives in 2017. At the time she said the suspicion of his guilt was out of the question.

"He was too much of a coward. He wouldn't harm a fly," she said.

Sweden's current Prime Minister Stefan Lofven once described the failure to determine who killed Olof Palme as an "open wound" in Swedish society. But the announcement that prosecutors believe they've identified the killer might not be enough to heal decades of uncertainty surrounding the death of one of the country's most influential and globally recognised leaders.

With no new forensic evidence or links to a gun, many are asking why it took investigators so long to reach their conclusion, which was largely the result of combing through witness statements taken from Stig Engstrom and others at the scene. Others are angry that the suspect, who died in 2000, will never be brought to justice.

For journalists following the story, the long, dry, news conference to announce the findings came as a flat ending to decades of wide-ranging theories about the assassination and claims in one Swedish tabloid this week that the killer's weapon had been traced. But the chief prosecutor told one reporter he wasn't "stupid enough" to believe that their conclusions would put an end to the conspiracies.

How was Olof Palme murdered?
The Swedish prime minister had discharged his guards on a Friday night on 28 February 1986 and had gone to the cinema with his wife Lisbet, their son Marten and his girlfriend.

Walking with his wife after the film on Stockholm's busiest street, Sveavagen, they were attacked by a gunman from behind.

Palme, 59, was shot in the back and died instantly. Bullets were recovered at the scene from a .357 Magnum handgun, but the gun was never found.

Why was no-one caught?
One man did go to jail. Convicted criminal Christer Pettersson - who has no connection to the prosecutor - was identified in a line-up by Lisbet Palme and jailed for life in 1989.

But he was quickly released on appeal as no motive had been established and no weapon retrieved. Pettersson died in 2004.

More than 130 people have confessed to the murder, the head of the investigation Hans Melander said.

At home he had infuriated business owners with reforms and spoken out against nuclear power.

He was critical of the Soviet invasion of Czechoslovakia in 1968 and the US bombing of North Vietnam and had attacked South Africa's "gruesome" regime of apartheid.

What theories have there been?
The case has dogged Swedish police for decades. For years it obsessed renowned author Stieg Larsson, who wrote The Girl with the Dragon Tattoo.

Among the theories put forward over the years, Palme was assassinated because:

He stood up against apartheid and funded the African National Congress (ANC) - Swedish police travelled to South Africa in 1996 to investigate the claim
Palme had discovered that Swedish arms firm Bofors had used bribery to set up an Indian weapons deal
Palme's government had declared the Kurdish militant PKK group terrorists
Lisbet Palme died in 2018 without knowing conclusively who murdered her husband.