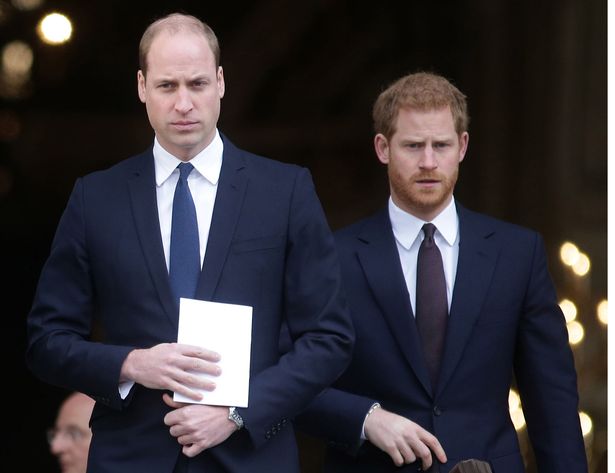 Prince Philip, who died on April 9 at age 99, planned his own funeral which is set to take place on Saturday. A royal commentator suspects he 'decided' Prince Harry and William will walk apart in the funeral procession.

Prince Philip most likely 'decided' that Prince Harry and William will walk apart in the funeral procession, a royal commentator has suggested.

The 99-year-old made a lot of plans for his funeral in the weeks leading up to his passing, according to Robert Jobson, royal expert.

The author who penned his biography, Prince Philip's Century: The Extraordinary Life of the Duke of Edinburgh, believes he would have planned to keep the royal siblings apart.

Philip left the Queen and Buckingham Palace staff with specific instructions following his death at Windsor Castle on April 9.

A royal expert has claimed the plans may have included keeping Prince William and Harry apart in the funeral procession.

Speaking on the Australian morning show Sunrise, presenter David Koch said: "They're afraid that lip readers will read what they say to each other.

"But it's not going to be a long procession at all so you could just talk about a barbecue with Phil that you had."

"My only thought on this is it's Philip's funeral. No one knows better what he would have wanted than the Queen.

"I'm pretty sure all this stuff gets run by her."

Royal commentator Scott added: "I agree, if ever there's a chance to not say anything it's at a funeral but they would have had the body language experts all over them no matter what.

"Philip had input into every detail of the funeral so it was probably his decision."

A reported rift between the brothers has been well documented, and royal fans across the world will be watching the Royal Family as they attend the funeral of the Duke later today.

Harry will be separated from his brother William by their cousin Peter Phillips, and the trio will walk in a line behind their grandfather's coffin at Windsor Castle.

Prince Charles, the future king will be one step ahead of his brother when the coffin is transported into St George's Chapel.

A palace spokesman said the Queen and her family are grateful for all the messages of condolence from around the world.

They added they have been touched to hear so many people - both young and old - sharing fond memories of the duke.