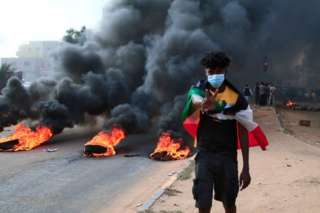 Doctors in Sudan say the security forces have shot dead a protester during the latest rally against last year's military coup.

The pro-democracy group, the Central Committee of Sudan Doctors, said the demonstrator died after taking shots to the chest and stomach during a protest in Omdurman, the twin city of the capital, Khartoum.

The committee says more than 100 people have been killed in such rallies since the military takeover in October.

Since then Sudan has descended into deepening unrest together with rising prices, food shortages and ethnic clashes.

The United Nations, the African Union and regional bloc Igad have been trying to facilitate talks to resolve the crisis.