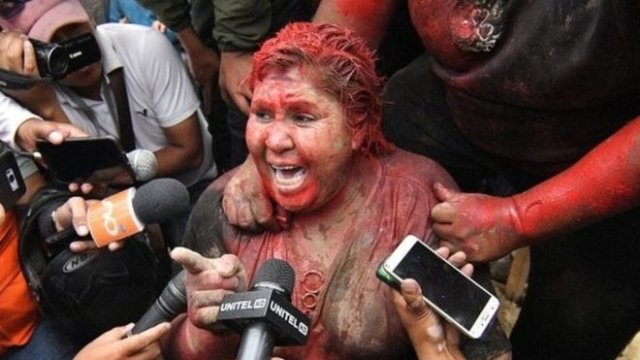 The mayor of a small town in Bolivia has been attacked by opposition protesters who dragged her through the streets barefoot, covered her in red paint and forcibly cut her hair.

Patricia Arce of the governing Mas party was handed over to police in Vinto after several hours.

It is the latest in a series of violent clashes between government supporters and opponents in the wake of controversial presidential elections.

At least three people have died so far.

What happened?
A group of anti-government protesters was blocking a bridge in Vinto, a small town in Cochabamba province in central Bolivia, as part of their ongoing demonstrations following the presidential election on 20 October.

Rumours spread that two opposition protesters had been killed nearby in clashes with supporters of incumbent president, Evo Morales, prompting an angry group to march to the town hall. 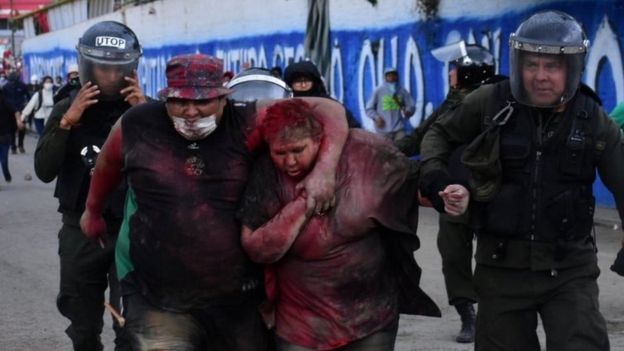 The protesters accused Mayor Arce of having bussed in supporters of the president to try and break a blockade they had set up and blamed her for the reported deaths, one of which was later confirmed.

Amid shouts of "murderess, murderess" masked men dragged her through the streets barefoot to the bridge. There, they made her kneel down, cut her hair and doused her in red paint. They also forced her to sign a resignation letter.

Ms Arce was eventually handed over to the police who took her to a local health centre.

Her office was set alight and the windows of the town hall were smashed. 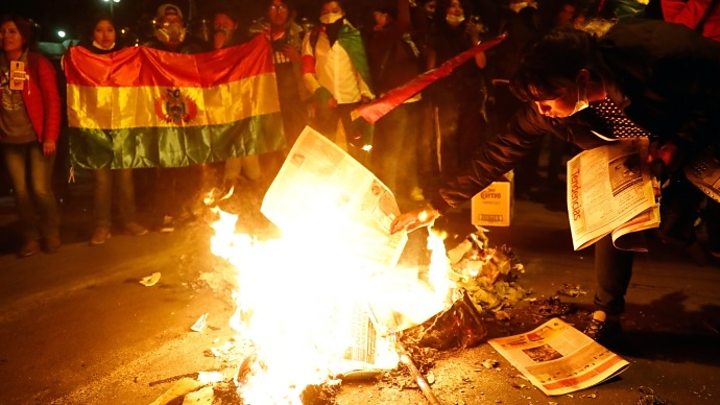 Who died?
The person killed in clashes between supporters and opponents of President Morales was identified as 20-year-old student Limbert Guzmán Vasquez. Doctors said Mr Guzmán Vasquez had a fractured skull which may have been caused by an explosive device.

He is the third person to be killed since the clashes between the two sides erupted on 20 October.

What's behind the clashes?
Tension has been running high since election night when the results count was inexplicably paused for 24 hours.

"This is not Cuba neither Venezuela," Bolivian protesters chanted last month

The suspension prompted suspicions among supporters of opposition candidate Carlos Mesa that the result had been rigged to allow Mr Morales, who has been in power since 2006 to stay on for another five years.

The final result gave Mr Morales just over the 10-percentage-point lead he needed to win outright in the first round of the presidential election.

Election observers from the Organization of American States (OAS) expressed their concerns and an audit by the body is currently underway. However, Mr Mesa has rejected the audit arguing that it was agreed without his or his party's input.

Mr Morales has accused Mr Mesa of staging a coup d'etat and supporters of each side have squared off in La Paz and other cities.