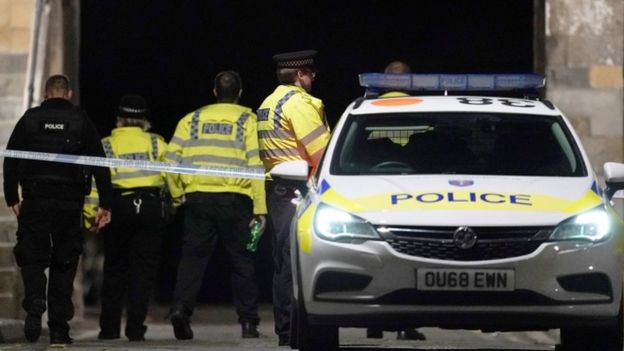 Three people have died and three more have been seriously injured after stabbings in a park in Reading, police confirmed.

A 25-year-old man from Reading has been arrested on suspicion of murder after being detained at the scene.

The attack happened at Forbury Gardens at about 19:00 BST where several people were stabbed.

Police are not currently treating the incident as terror-related, but counter terrorism officers were called.

Security sources have told the BBC a man arrested at the scene is thought to be Libyan.

Home affairs correspondent Daniel Sandford said he had been told the man had previously been in prison in the UK for a relatively minor conviction, not a terrorism offence.

One eyewitness told the BBC how he saw a man move between groups of people in the park trying to stab them and how the man ran towards him.

There were reports a police officer had "rugby tackled" the suspect to the ground, according to the Sunday Mirror.

Det Chf Supt Ian Hunter, from Thames Valley Police, said police were not looking for any other people in connection with the attack, adding that officers were "keeping an open mind as to the motivation for the incident".

Police have asked anyone with mobile phone footage of the attack to come forward and people have been urged not to share videos and photos online "out of respect for the victims' families".

Thames Valley Police said the incident was not connected to an earlier Black Lives Matter (BLM) protest in the park.

About a dozen armed police officers carrying shields were later seen entering a block of flats in Basingstoke Road in Reading at about 23:00 BST.

BBC News Home Affairs correspondent Dominic Casciani, who was outside the block of flats, said he heard a loud bang at the scene.

Throughout Saturday evening, residents of the Basingstoke Road flats that were raided by the police stood - increasingly cold - on the footpath, watching on astonished as armed police entered their home.

The first officers arrived at 20:00 BST and secured the scene - apparently asking some residents to leave their flats or preventing others from returning.

At 23:00 BST, more than a dozen armed officers, carrying shields entered the central block and climbed the stairs to the upper floors. At about 00:30 BST there was a loud bang that sounded like it came from inside one of the flats.

Shortly afterwards lots of the armed team left the scene. People here are shocked - but absolutely none the wiser as to what is going on.

Prime Minister Boris Johnson said his "thoughts are with all of those affected by the appalling incident in Reading".

"My thanks to the emergency services on the scene," he added.

'He started coming towards us'
Laurence Wort, 20, who was visiting Reading for the day, told the BBC he was about 10m away when the attack started.

"The park was pretty full, a lot of people sat around drinking with friends when one lone person walked through, suddenly shouted some unintelligible words and went round a large group trying to stab them.

"When he realised that he couldn't catch us he tried to stab another group sat down.

"He got one in the back of the neck and then when he realised everyone was starting to run, he ran out the park."

Claire Gould, a freelance journalist who lives in Reading, said she walked past Forbury Gardens at about 18:40 BST "and everything seemed calm".

She then saw an air ambulance land in King's Meadow - another park close to the scene - at about 19:00 BST, followed by a second about 10 minutes later.

"There were multiple sirens from 19:00 going on for the next couple of hours and police helicopters [were] circling," she added.

Home Secretary Priti Patel tweeted to say she was "deeply concerned" about the incident.

Ms Patel later issued a statement condemning the stabbings as a "senseless attack on people simply enjoying a Saturday evening with family and friends".

'Peaceful protest'
A Black Lives Matter protest was held in the area a few hours before the attack.

BLM organiser Nieema Hassan said in a video message posted to Facebook: "They [BLM protesters] were very peaceful and we worked with the police liaison.

"In terms of the protest and the people who attended from Black Lives Matter, we're all safe.

"None of us are affected. We had all left by the time this happened."
Source : BBC

Black Queens paired against Nigeria in qualifier for 2022 AWCON