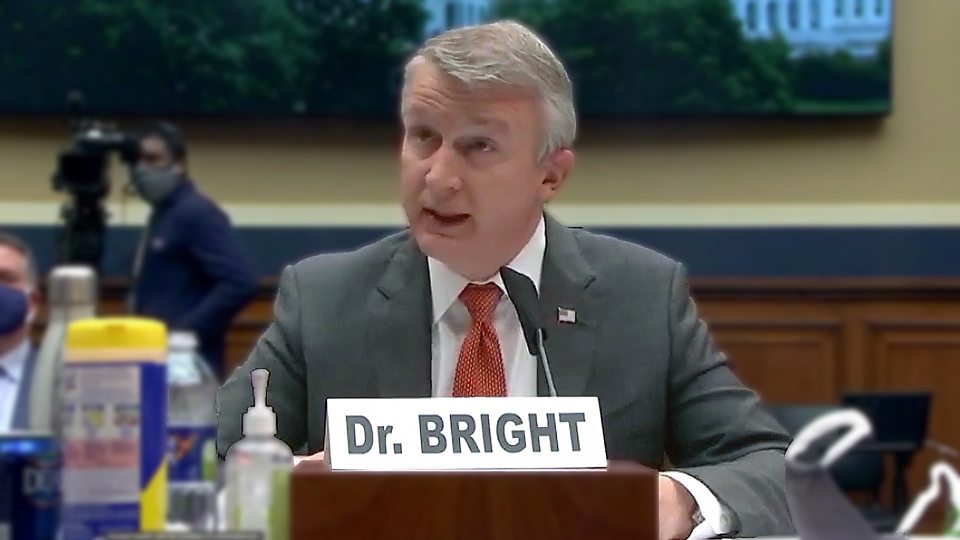 A former top US health official has told Congress the country could face its "darkest winter in modern history" because of the coronavirus.

Rick Bright led the government agency trying to develop a vaccine, but was removed from his post last month.

He has previously said he was ousted from the job for raising concern over a treatment being touted by President Donald Trump.

The US leader dismissed him as a "disgruntled" employee.

Mr Bright also told the House of Representatives subcommittee on health "lives were lost" because of government "inaction" in the early stages of the outbreak.

He said he first spoke out about a medical equipment shortage in January, raising the issue to the "highest levels" of the Department of Health and Human Services (HHS), but "got no response".

In other US developments:

A total of 85,807 people have now died with the coronavirus in the US. New York state continues to have the highest death toll in the US, with 27,607 deaths

Richard Burr, the Republican chairman of the US Senate intelligence committee, has said he will step down while an investigation into allegations of insider trading is carried out. Mr Burr is accused of using inside information to avoid market losses from the coronavirus pandemic

What else did Mr Bright say?

During his testimony, Mr Bright warned that the US's "window of opportunity" to deal with the coronavirus was "closing".

"If we fail to improve our response now, based on science, I fear the pandemic will get worse and be prolonged," he said.

"Without better planning, 2020 could be the darkest winter in modern history."

Mr Bright also told the subcommittee that in January he received an email he would "never forget", from a supplier of medical-grade face masks who warned of a severe shortage.

"He said... we need to act. And I pushed that forward to the highest level that I could of HHS - and got no response."

Mr Bright said his removal from his post was the result of his insisting that money allocated by Congress to deal with the virus should be put "into safe and scientifically vetted solutions, and not in drugs, vaccines and other technologies that lack scientific merit".

"I spoke out then, and I am testifying today, because science - not politics or cronyism - must lead the way to combat this deadly virus," he added.

A whistleblower complaint, filed earlier this month, says Mr Bright was removed from his post as director of the Biomedical Advanced Research and Development Authority (Barda) for political reasons.

Mr Bright says he was removed shortly after the publication of an article on chloroquine, for which he says he was a source.

President Trump had referred to hydroxychloroquine, an antimalarial drug, as a potential "game-changer" in the treatment of Covid-19 - although many experts have cautioned that it could be ineffective, or even dangerous.

Mr Bright's complaint alleges that he chose to speak to a journalist because government officials "refused to listen" to his warnings.

He said he had an obligation to try and protect the public "from drugs which he believed constituted a substantial and specific danger to public health and safety".

How did Trump respond?

After the hearing, President Trump told reporters: "I don't know him. I never met him. I don't want to meet him.

"But I watched him, and he looks like an angry, disgruntled employee who, frankly, according to some people, didn't do a very good job."

"Everything he was complaining about was achieved - what he talked about was done," Mr Azar said.