Russia invasion: Putin still wants to take most of Ukraine - US 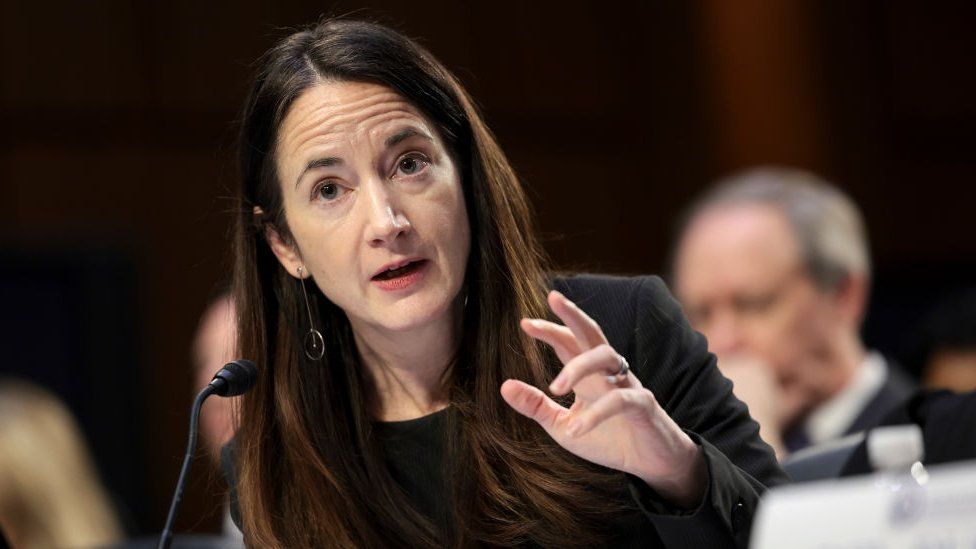 Moscow's troops have been so weakened by combat, however, that US officials assess they are only capable of making slow territorial gains.

It means the war could last for a long time, Director of National Intelligence Avril Haines says.

In March Moscow refocused its efforts on seizing Ukraine's Donbas area after failing to take Kyiv and other cities.

Mr Putin still has the same goals as the ones he held at the start of the conflict, the US's top intelligence officer Ms Haines said - to take most of Ukraine.

But, she says, Russia is unlikely to achieve that goal any time soon.

"We perceive a disconnect between Putin's near-term military objectives in this area and his military's capacity, a kind of mismatch between his ambitions and what the military is able to accomplish," she told a US Commerce Department conference.

Since failing to achieve its initial goal of capturing Kyiv, Russia has focused on seizing territory in the eastern Donbas region - a large, industrial area where Mr Putin falsely claims Ukraine has carried out a genocide against Russian speakers.

Russian forces have made gains there, recently taking control of the city of Severodonetsk, but progress has been slow and Ukrainian forces have put up strong resistance.

Long-running war
In her first public comments since May on the US intelligence assessment of the war, Ms Haines suggested Russia's invasion would grind on "for an extended period of time" and that "the picture remains pretty grim".

She said intelligence agencies see three scenarios of how the war could play out, the most likely being a slow moving conflict with Russia making "incremental gains, with no breakthrough".

The other, less likely possibilities include a major Russian breakthrough, or a stabilisation of the frontlines with Ukraine achieving small gains.

It may mean Moscow becomes more dependent on "asymmetric tools" to target its enemies; including cyber attacks, efforts to control energy resources and even nuclear weapons.

Ms Haines' comments came on Wednesday after Nato leaders pledged to stand behind Ukraine for as long as it takes - boosting their troop presence across Europe and inviting Finland and Sweden to join the group.

Nato chief Jens Stoltenberg called it the alliance's biggest overhaul since the Cold War, with US President Joe Biden vowing that Nato would be "strengthened in all directions across every domain - land, air and sea".

"If Nato troops and infrastructure are deployed, [Russia] will be compelled to respond," Mr Putin said while on a trip to Turkmenistan.

Ukraine's President Volodymyr Zelensky says his country needs around $5bn (£4.12bn) a month to fund the war against Russia.