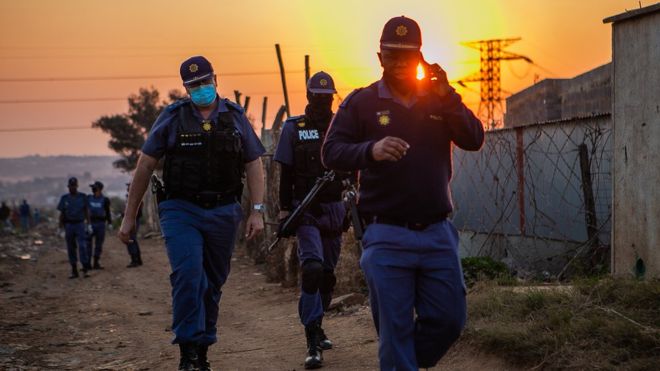 A South African court has found some coronavirus lockdown regulations imposed by the government "unconstitutional and invalid".

The judge picked out rules around funerals, informal workers and amount of exercise as "irrational".

The government was given14 days to overhaul the regulations.

South Africa initially had some of the world's most restrictive lockdown measures. The country has 35,812 confirmed cases and 755 deaths.

The case was filed by the Liberty Fighters Network and the Hola Bona Renaissance Foundation.

The high court in the capital, Pretoria, ruled that the regulations were not connected to slowing the rate of infection or limiting its spread.

"The regulations... in a substantial number of instances are not rationally connected to the objectives of slowing the rate of infection or limiting the spread thereof," the written judgement read.

Judge Norman Davis argued it was wrong to allow people to travel to attend funerals but not to earn their livelihoods by street trading, as many South Africans do.

The government said it will review the regulations but in the meantime the current lockdown regulations will apply.

South Africa has eased its lockdown restrictions and this week alcohol sales resumed following a two-month ban - but only for home consumption.

But all sales of cigarettes remain outlawed.

Gatherings, except for work, religious ceremonies and funerals, are still banned.

Travel between provinces is also prohibited, and international flights are cancelled except for those repatriating citizens.

Police have opened almost 230,000 cases for violating lockdown regulations since the beginning of lockdown on 26 March, according to the Police Minister Bheki Cele.

Contraventions have included breaches of the ban on alcohol and cigarette trade, failure to stay at home and gathering illegally.