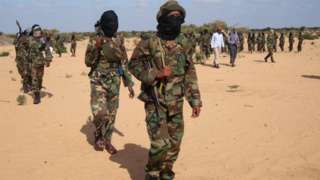 The UN has condemned a mortar attack on Somalia's parliament, which injured at least seven people, including bodyguards.

The Islamist militant group, al-Shabab, said it carried out the attack which happened as MPs were setting a date for the election of speakers for the upper and lower houses of parliament later this month.

This should lead to a long delayed vote for a new president.

In a statement the UN said it stood firm with Somalis in their efforts to complete the electoral process.