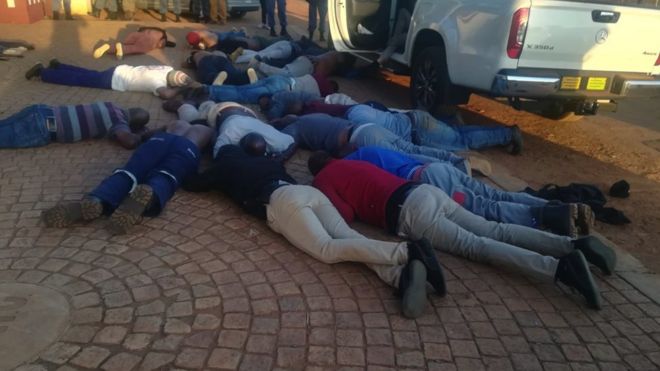 Police released images of suspects lying on the ground
Shares

Five people have been killed after attackers stormed a South African church, reportedly amid an argument over its leadership.

South African police said they had rescued men, women and children from a "hostage situation" on the outskirts of Johannesburg on Saturday morning.

They have also arrested at least 40 people, and seized dozens of weapons.

Eyewitnesses say the men who stormed the International Pentecostal Holiness Church were part of a splinter group.

The church's leadership has reportedly been the subject of infighting since its former leader died in 2016. Police had previously been called to the church following a shoot out between members in 2018, South Africa's IOL reports.

The year before, the church's finances had come under the spotlight, amid allegations some 110m rand ($6.5m; £5.2m) had gone missing, according to The Sowetan newspaper.

READ ALSO: Coronavirus: United Airlines to furlough up to 36,000 staff

According to national police spokesperson Brigadier Vish Naidoo, a group of attackers indicated to those inside "that they were coming to take over the premises".

He said four people had been found shot and burnt to death in cars, while a security guard, who was thought to have been responding to the incident, was also fatally shot.

Five rifles, 16 shotguns and 13 pistols, along with other weapons, were found at the church, which police have been combing for evidence.

The International Pentecostal Holiness Church is thought to have about three million members in Southern Africa.