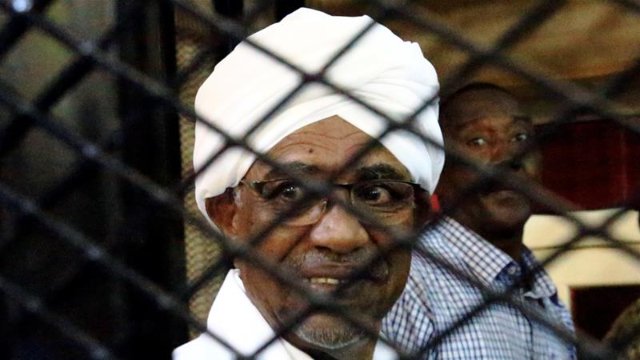 Al-Bashir, 75, has been in custody since April, when Sudan’s military stepped in and removed him from power.
Shares

Sudan's ex-president Omar al-Bashir has been sentenced to two years in a social reform facility for corruption.

The judge told the court that, under Sudanese law, people over the age of 70 cannot serve jail terms. Bashir is 75.

Bashir also faces charges related to the 1989 coup that brought him to power, genocide, and the killing of protesters before his ousting in April.

During the sentencing, his supporters started chanting that the trial was "political" and were ordered to leave.

They continued their protest outside the court, chanting: "There is no god but God."

Afterwards one of the ousted leader's lawyers, Ahmed Ibrahim, said they would appeal against the verdict.

Mohamed al-Hassan, another lawyer for Bashir, previously said that the defence did not consider the trial a legal one but a "political" one.

It is unclear whether Bashir will be tried over widespread human rights abuses during his time in power, including allegations of war crimes in Darfur.

The corruption case was linked to a $25 million (£19 million) cash payment he received from Saudi Crown Prince Mohammed bin Salman.

Bashir claimed the payments were made as part of Sudan's strategic relationship with Saudi Arabia, and were "not used for private interests but as donations".

None of the active cases against Bashir in Sudan is linked to the charges he faces at the International Criminal Court (ICC) for genocide, war crimes and crimes against humanity, over the conflict in Darfur that broke out in 2003.

The UN says that around 300,000 people were killed and 2.5 million were displaced in the war.

After Bashir was ousted in April, ICC prosecutors in The Hague requested that he stand trial over the Darfur killings.

The Sudanese army generals who seized power immediately after his fall initially refused to comply, but Sudan's umbrella protest movement - which now has significant representation in the country's sovereign council - recently said it would not object to his extradition.

Prosecutors in Sudan have also charged him with the killing of protesters during the demonstrations that led to him being ousted.

Kudus Mohammed travels with Ajax squad to Austria for pre-season

Eight more people have succumbed to the novel coronavirus disease in Ghana,…