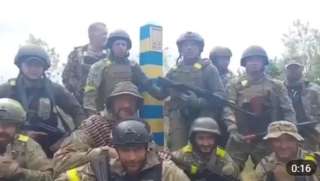 More now on reports that Ukrainian troops counter-attacking near the city of Kharkiv have reached the Russian border.

The Ukrainian defence ministry has published a video purportedly showing a number of soldiers from a territorial defence brigade at an unspecified location on the frontier.

The governor of the Kharkiv region, Oleh Sinegubov, said troops had restored a sign marking the border.

"We are proud of the soldiers... who restored the border sign on the state border!" he wrote on Telegram.

"We thank everyone who, risking their lives, liberates Ukraine from Russian invaders," he added.

Russia has committed newly mobilised units from occupied Donetsk and Luhansk to Kharkiv, "further evidence of the inadequacy of Russia’s available reserves", the Institute for the Study of War think tank reports.

Ukrainian forces have been retaking territory in north-eastern areas in recent days, pushing the Russians out of artillery range of Kharkiv – which had endured weeks of bombardment. Russia has been continuing its offensive in the Donbas region further south.