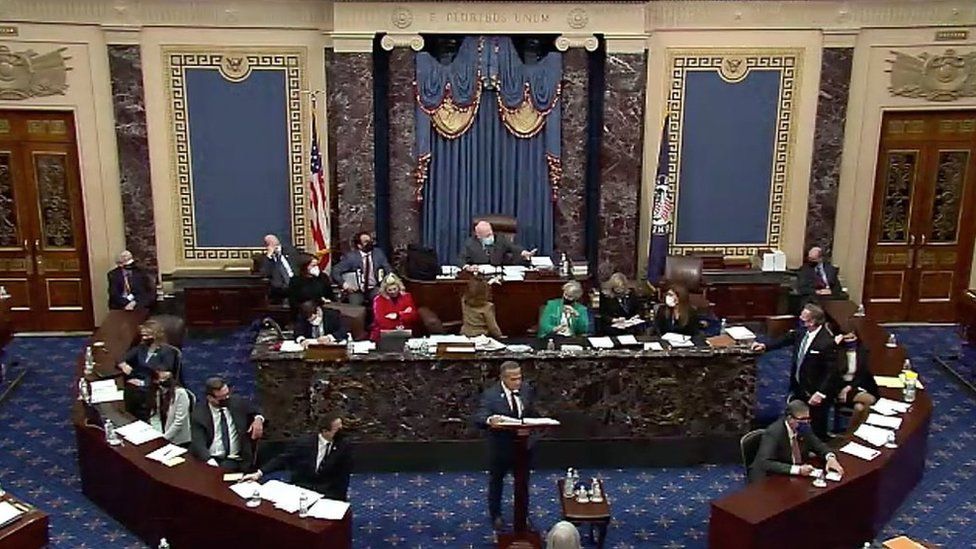 The US Senate has fallen short of the two-thirds majority needed to convict former President Donald Trump on a charge of incitement to insurrection over the Capitol riot on 6 January.

A majority of senators - 57 to 43, including seven Republicans - voted to convict Mr Trump, 10 votes short of the 67 required for conviction.

After his acquittal, Mr Trump released a statement denouncing the trial as "the greatest witch hunt in history".

This was Mr Trump's second impeachment.

If he had been convicted, the Senate could have voted to bar him from running for office ever again.

After the vote, the senior Republican in Congress, Senator Mitch McConnell said Mr Trump had been "responsible" for the assault on the Capitol and called it a "disgraceful, disgraceful dereliction of duty".

Earlier, he voted against conviction, saying it was unconstitutional now that Mr Trump was no longer president. Mr McConnell was instrumental in delaying Mr Trump's trial until after he left office, on 20 January.

However, Mr McConnell warned Mr Trump could still be held liable in court.

"He didn't get away with anything yet. Yet. We have a criminal justice system in this country, we have civil litigation and former presidents are not immune from being [held] accountable by either one," he said.

President Joe Biden said: "While the final vote did not lead to a conviction, the substance of the charge is not in dispute.

"This sad chapter in our history has reminded us that democracy is fragile. That it must always be defended. That we must be ever vigilant. That violence and extremism has no place in America. And that each of us has a duty and responsibility as Americans, and especially as leaders, to defend the truth and to defeat the lies."

What happened on Saturday?
In their closing statements, the Democratic House of Representatives lawmakers appointed to shepherd the process through the Senate warned that it would be dangerous to acquit Mr Trump.

"The stakes could not be higher because the cold, hard truth is that what happened on 6 January can happen again," Representative Joe Neguse said.

"History has found us. I ask that you not look the other way," Representative Madeleine Dean said.

"This impeachment has been a complete charade from beginning to end," he said. "The entire spectacle has been nothing but the unhinged pursuit of a long-standing political vendetta against Mr Trump by the opposition party."

Mr Trump himself said no president had "ever gone through anything like it" and that "the movement to Make America Great Again" had "only just begun".

Analysis box by Anthony Zurcher, North America reporter
At its most basic level, this is a win for the former president. He is still eligible to run for president again in 2024, if he so chooses. His base, by all indications, is still largely intact. Both in the House of Representatives and in the Senate, most Republican officeholders opposed the impeachment proceedings. Those who broke ranks are already facing ferocious criticism and, in some cases, formal reprimands from their Republican constituents.

Trump did not emerge from this impeachment trial unscathed, however. One of the most memorable portions of the prosecution case by the impeachment managers were the new videos of Trump's supporters, wearing Make America Great Again hats and waving Trump flags, ransacking the Capitol.

Those images will forever be associated with the Trump brand. Every rally he holds from here on will evoke memories of that riot. It may not cost him among the Republican rank and file, but independent voters - and moderates - are unlikely to forget.

Why did the Senate not hear any witnesses?
Senators initially voted for personal testimony, which would have delayed a possible verdict on Saturday. But after emergency consultations to avoid any hold-up, they changed their ruling to admit written statements only.

The flip-flop came after discussion of a phone call between the former US president and a top Republican official, Kevin McCarthy, while the riot was going on.

A Republican member of the House of Representatives, Jaime Herrera-Beutler, said Mr McCarthy had told her about the call on the day.

She said Mr McCarthy had implored Mr Trump to call off the rioters, but the president had wrongly blamed left-wing activists broadly known as "antifa".

"McCarthy refuted that and told the president that these were Trump supporters," Ms Herrera-Beutler said. "That's when, according to McCarthy, the president said: 'Well, Kevin, I guess these people are more upset about the election than you are.'"

Instead, the congresswoman's statement was admitted in written evidence.