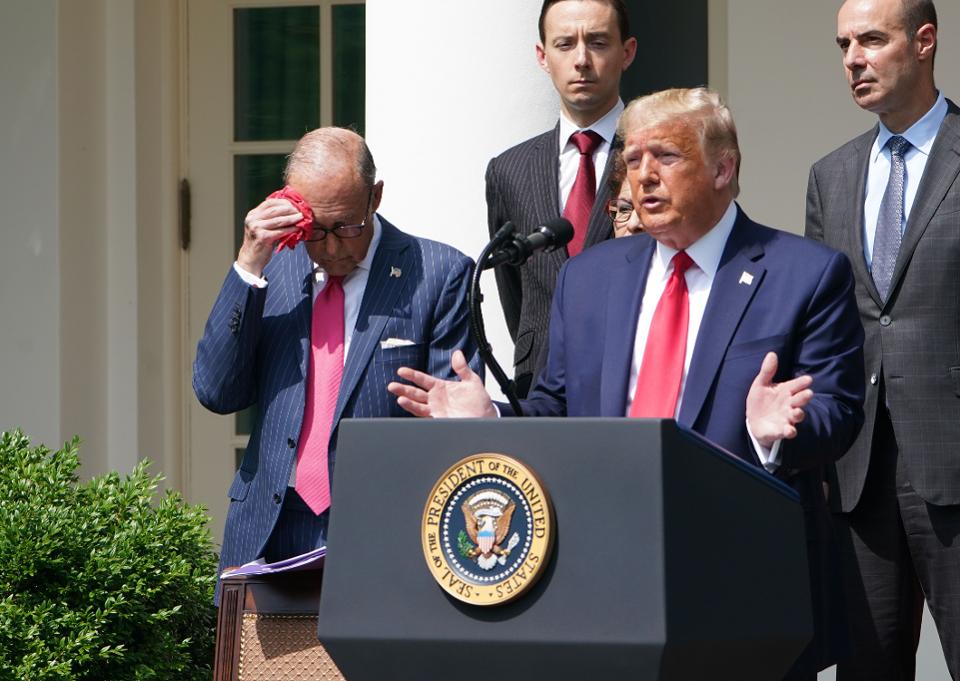 US President Donald Trump says he will "not even consider" renaming military bases named for Confederate generals.

He tweeted that the facilities were part of "a Great American heritage".

Mr Trump's remarks follow reports that top military officials were open to changes amid nationwide soul-searching after the death of George Floyd.

For many, symbols of the Confederacy - the slaveholding southern states that seceded, prompting the 1861-65 American Civil War - evoke a racist past.

Confederate monuments have been a frequent target for protesters following Floyd's death.

On Wednesday night a statue of Jefferson Davis, the president of the Confederacy, was brought down by protesters in Richmond, Virginia.

Meanwhile, demonstrators in the nearby city of Portsmouth attacked a Confederate monument, tearing down four statues, according to local media reports.

What did the president say?
Mr Trump tweeted on Wednesday that bases named for Confederate generals "have become part of a Great American heritage, a history of Winning, Victory and Freedom".

He added: "The United States of America trained and deployed our HEROES on these Hallowed Grounds, and won two World Wars. Therefore, my Administration will not even consider the renaming of these Magnificent and Fabled Military Installations.

"Our history as the Greatest Nation in the World will not be tampered with. Respect our Military!"

White House press secretary Kayleigh McEnany told a news briefing afterwards that the possibility of renaming those bases was "an absolute non-starter" for Mr Trump.

She said he would not sign any legislation that Congress might ever pass requiring such name changes.

What prompted Trump's tweets?
On Monday a Pentagon official said Defence Secretary Mark Esper and Army Secretary Ryan McCarthy were "open to a bipartisan discussion on the topic" of removing Confederate names from the bases.

Earlier this week, the US Marine Corps issued an order for commanders to "identify and remove the display of the Confederate battle flag or its depiction within workplaces, common-access areas and public areas on their installations".

In an op-ed on Tuesday backing the idea, retired four-star US Army general David Petraeus wrote of his time at Fort Bragg: "The irony of training at bases named for those who took up arms against the United States, and for the right to enslave others, is inescapable to anyone paying attention."

The 10 bases named for Confederate generals include well-known installations such as Fort Bragg in North Carolina, Fort Hood in Texas and Fort Benning in Georgia.

They are all located across the US South predominantly in states that helped deliver Mr Trump's victory in 2016, and he is relying on them to support him again in November's election.

A lost cause?
Just an hour or so before the president held a roundtable session with black supporters, he was tweeting about his vehement opposition to removing the names of Confederate generals from US military bases.

Such jarring hairpin turns are standard procedure for this White House, however - as Donald Trump veers from professions of support for minorities to moves that could rankle many of them.

It may be surprising that the US would even have bases named after officers who led armies against US soldiers, but such are the contradictions that remain more than 150 years after the Civil War's conclusion.

Some still view those generals as heroes to a lost cause. That hasn't stopped local and state governments from taking down their statues, however, as a slow reckoning with the legacy of the Confederacy is spread to even the deepest portions of the South.

The president, however, seems unyielding. He has supported what he calls the "beautiful" statues, and he's willing to lean into a fight to keep their names on government facilities. Even at a time when the American public is reconsidering race relations in the nation, the president has decided this a fight worth having.

Who else wants rid of the Confederate symbols?
The death last month of George Floyd, an unarmed black man, after a policeman knelt on his neck in Minneapolis, Minnesota, has reopened America's long-festering racial wounds.

On Wednesday, Nascar - a league in which both drivers and fans are overwhelmingly white - announced that it would ban the flying of Confederate flags at its races and other events.

On Wednesday, US House of Representatives Speaker Nancy Pelosi called for Confederate monuments in the US Capitol building in Washington DC to be removed.

"Monuments to men who advocated cruelty and barbarism to achieve such a plainly racist end are a grotesque affront to these ideals," said the California Democrat in a statement.

"Their statues pay homage to hate, not heritage. They should be removed."

Each US state gets to pick two statues to send to the Capitol complex, where the Senate and House are situated.

Many of the Confederate figures have been moved to less central locations in the building in recent years, though some lawmakers have argued these statues should be removed altogether.