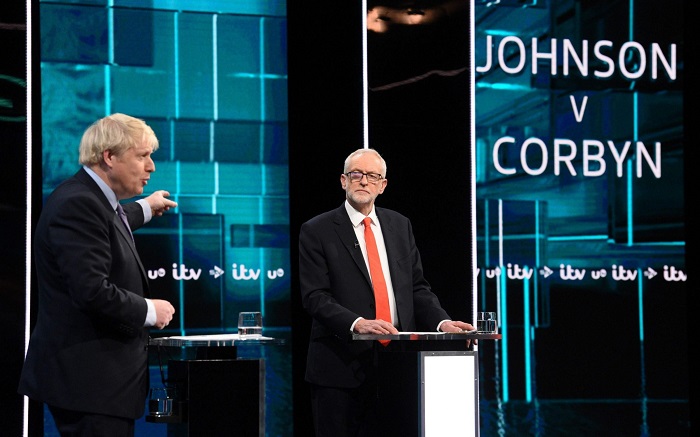 Boris Johnson and Jeremy Corbyn locked horns over the NHS, Brexit and the Royal Family
Shares

Boris Johnson and Jeremy Corbyn have clashed over Brexit in the first TV election debate of the campaign.

Mr Johnson promised to “end this national misery” and said Labour offered “only division and deadlock”.

Mr Corbyn said Labour would “get Brexit sorted by giving you, the people, the final say”.

The two leaders also locked horns over the NHS, trust and leadership, the future of Scotland – and the Royal Family.

BBC political editor Laura Kuenssberg said it was not clear if either men had won or lost the debate but it was striking how the audience had been ready to laugh at their statements.

A snap YouGov poll suggested the public were evenly split on who had won the debate, “with most Labour voters thinking Jeremy Corbyn won, most Conservative voters thinking Boris Johnson won”.

Meanwhile, the Conservatives received criticism for rebranding one of their Twitter accounts as “factcheckUK” during the debate.

Will Moy, the chief executive of fact-checking website Full Fact, accused the party of trying to “mislead” voters and said Twitter “could have acted sooner,” including by forcibly renaming the account.

But Foreign Secretary Dominic Raab defended the move, saying it offered an “instant rebuttal mechanism” against “nonsense thrown at the Conservatives”.

SNP leader Nicola Sturgeon said she was “not impressed at all” by the debate and said neither man was “fit” to be prime minister.

Liberal Democrat Leader Jo Swinson dismissed the performances of Mr Johnson and Mr Corbyn as “bluster and diversion from both of them”.

Green Party co-leader Sian Berry expressed dismay at the “climate chaos” issue being “relegated to the quickfire round in that debate”.

And Brexit Party leader Nigel Farage said Mr Corbyn was the “better debater” but criticised him for not saying if he would Leave or Remain in a future referendum.

The Lib Dems and SNP lost a court challenge to ITV’s decision not to include their party leaders in the debate.

The NHS and Brexit

The first half of the debate was dominated by questions on Brexit.

Mr Johnson wants to win a majority in 12 December’s general election so he can get the Brexit deal he struck with the EU into law and take the UK out of the bloc 31 January and begin talks with Brussels on a permanent trading relationship.

Mr Corbyn says he would tear up Mr Johnson’s agreement and negotiate a new deal with the EU, with a customs union and a closer relationship with the single market, which he would then put to a public vote.

A row broke out over the Labour leader’s claim that US health firms will be given access to the NHS in a post-Brexit trade deal.

Mr Corbyn told the PM: “You are going to sell our National Health Service out to the United States and Big Pharma.”

He held up redacted accounts of “a series of secret meetings” with the US, in which the government proposed “full market access for US products to our NHS.”

In response, Mr Johnson said the claims were “an absolute invention” and that there were “no circumstances whatever in which this government or any Conservative government will put the NHS on the table in any trade negotiation.”

The two leaders then clashed over whether Brexit put the future of the union between England and Scotland at risk.

Mr Johnson claimed Labour would agree to another referendum on Scotland to get the support of the SNP and that isn’t a price he would be willing to pay.

But Mr Corbyn called the PM’s comments “nonsense” and insisted his party would not form a coalition between with the SNP.

Asked about the issue of trust, Mr Johnson said a toxic atmosphere in politics had been caused by MPs “repeatedly refusing to honour the referendum”.

The Labour leader said “trust is something that has to be earned and as a public representative you have to listen”. He said his style of leadership was to “listen to people and try to bring consensus”.

Asked by ITV presenter Julie Etchingham if they would “make a gesture” to change the tone of the debate, the pair shook hands.

On health, both men praised the NHS, with Mr Corbyn and Mr Johnson describing it as “one of the most civilised things about this country” and “one of the single most beautiful and brilliant things about Britain” respectively.

However they quickly differed over NHS management. Mr Corbyn called for an “end to privatisation” of services. Mr Johnson insisted his party was not privatising the NHS.

Asked if the monarchy was “fit for purpose”, Mr Corbyn replied: “Needs a bit of improvement.”

Mr Johnson said: “The institution of the monarchy is beyond reproach.”

Asked if the Duke of York Prince Andrew was “fit for the purpose” following criticism over his friendship with the sex offender Jeffrey Epstein, Mr Corbyn said there were “very, very serious questions that must be answered” adding “nobody should be above the law”.

Mr Johnson said “The law must certainly take its course.”

The final question pushed the leaders to say what Christmas present they would give each other. Mr Corbyn said he would get the PM a copy of Christmas Carol by Charles Dickens “and then he can understand how nasty Scrooge was”.

Mr Johnson initially said he would buy the Labour leader “a copy of my brilliant Brexit deal” but when pushed to give a “non-political answer” he said he would get “some damson jam”.

Following the head-to-head between the Labour and Conservative leaders, the leaders of the Brexit Party, Greens, Lib Dems and SNP were interviewed separately on ITV.

During her interview, Lib Dem leader Jo Swinson emphasised her party’s opposition to Brexit and said she could offer the country a “better future” than “those two tired old parties”.

She also said her party had plans for a frequent flyer tax to help combat climate change.

SNP leader Nicola Sturgeon said “neither of these men should be able to determine Scotland’s future” and promised voters that her party would ensure people “escape the chaos of Brexit”.

She also insisted “no deal has been done” to form a coalition with the Labour Party in the event of a hung Parliament.

Brexit Party leader Nigel Farage called the current political system “broken, rotten and corrupt” and said he would change the voting system and scrap the House of Lords.

Last up was Green Party co-leader Sian Berry, who accused Mr Corbyn and Mr Johnson of failing to properly address climate change, which she said would leave young people feeling “let down”.