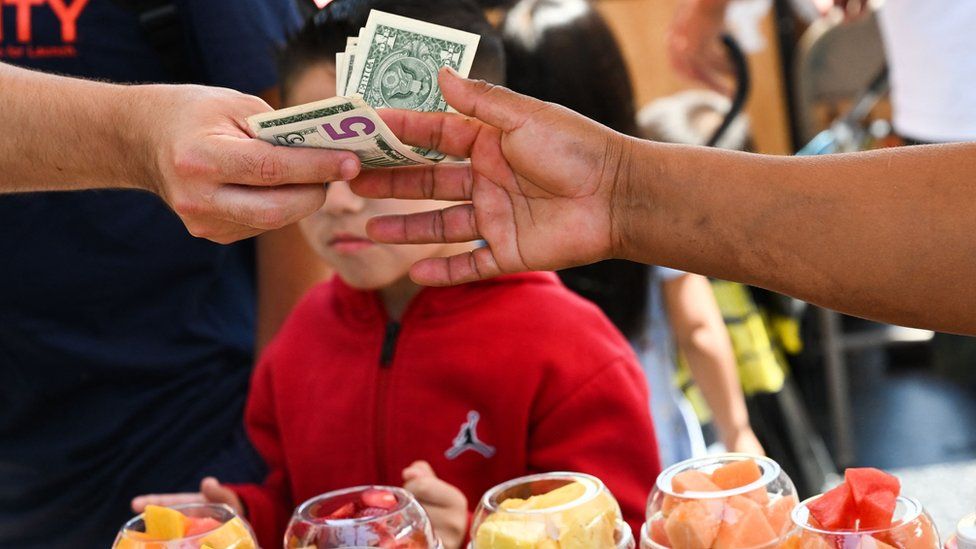 The US economy has shrunk for the second quarter in a row, a milestone that in many countries would be considered an economic recession.

That is not the case in the US, which uses additional data to make that call.

But the contraction, at an annual rate of 0.9% in the three months to July, has drawn widespread attention as worries about the economy grow.

Prices for groceries, petrol and other basics are rising at the fastest pace since 1981.

As the US central bank raises borrowing costs quickly to try to cool the economy and ease price pressures, fears are rising that a recession is coming - if it has not officially started already.

Faced with sinking public confidence, US President Joe Biden has tried to make the case that the economy remains sound, noting that the unemployment rate remains at a low 3.6% and hiring has remained strong.

"If you look at our job market, consumer spending, business investment - we see signs of economic progress," Mr Biden said Thursday, noting the historic post-pandemic gains the US experienced last year. "There's no doubt we expect growth to be slower than last year .... That's consistent with a transition to stable, steady growth and lower inflation."

This week, ahead of the data from the Commerce Department, he told reporters that the economy was "not going to be in a recession". That prompted his opponents in the Republican party to accuse the White House of trying to redefine the term.

In the first three months of the year, the US economy shrank at an annual rate of 1.6%. At the time, economists attributed the decline in gross domestic product (GDP) to quirks in trade data.

But Thursday's report showed more marked slowdown, with growth weighed down by declines in the housing market, business investment and government spending. Consumer spending grew at a slower annual rate of 1%, as people spent more on healthcare, accommodation and dining out, but cut back on goods and groceries.

Harvard professor Jeffrey Frankel previously served on the National Bureau of Economic Research committee, the group of academics that is charged with making the official declaration of recession.

He said he did not think a recession started at the beginning of the year, noting the strong jobs growth. But after that he was less confident.

"Things have already slowed down, so I'm not saying that everything is great," he said. "Odds of a recession going forward are substantially higher than for a random year."

Inflation in the US hit 9.1% in June, the fastest pace of price appreciation in more than four decades.

On Wednesday, the US central bank responded to the problem with another unusually large increase to its key interest rate, its second 0.75 percentage point rise since it started raising rates in March.

By making borrowing costs more expensive, the Federal Reserve is hoping to reduce spending on items such as homes and cars, in theory easing some of the pressures putting up prices. But lower demand also means a decline in economic activity.

Recent reports have shown consumer confidence falling, the housing market slowing, and the first contraction in business activity since 2020.

The US stock market has sunk since the start of the year, and companies from social media giant Meta, the owner of Facebook and Instagram, to carmaker General Motors have said they plan to slow hiring. Some other firms, especially in the property sector, have announced job cuts.