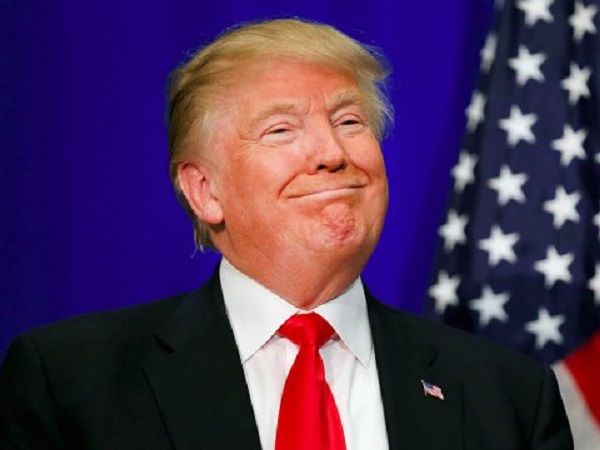 All regional markets are lower, with money flowing into safe haven stocks, gold and currencies including the yen.

Japan's Nikkei 225 closed down by 5.4% while European and US markets are expected to drop when trading resumes on Wednesday.

Some analysts have likened the shock of a probable Trump victory to the Brexit result earlier this year.

However neither markets nor currencies have swung as wildly as they did after June's EU referendum - and many Asian markets saw losses narrow towards the end of Wednesday trading.

The Hang Seng in Hong Kong is trading 2.9% lower and the Shanghai Composite has lost 0.3%. Australia's ASX 200 finished down 1.9% while the Kospi in South Korea ended 2.7% lower.

A Donald Trump win had been widely seen as negative for Asia's economies because of some of the protectionist rhetoric he's talked about whilst on the campaign trail. He is viewed as the "great unknown" while Mrs Clinton is seen as an example of "better the devil you know."

And as that prospect looks more and more likely, many investors in Asia are getting concerned, and the markets are reflecting that.

On the Singapore trading floor where I've been all day, things started with cautious optimism that Mrs Clinton might have a significant lead, but that has all changed.

As results trickle in, the first mutterings of "too close to call" began, swiftly replaced by a growing belief that the former reality TV show host would be the next president.
'Unknown'

The Japanese yen, viewed as a safe haven currency in situations of international volatility, strengthened by 3% against the dollar.

Meanwhile concerns about the impact of a Trump presidency on the Mexican economy saw its currency, the peso, fall more than 13% against the dollar to its lowest level in two decades.

Mexico is expected to suffer if Mr Trump is elected because of his pledges to build a wall along the US border with the country and renegotiate their trade agreement.
A victory for Mr Trump would be a "step into the unknown" said chief US economist at Capital Economics, Paul Ashworth.

"We simply can't know what type of President Trump will be. Will he be the demagogue from the campaign trail, who threatened to lock up his political opponents, punish the media, build border walls and start a global trade war? Or is he capable of becoming a statesmanlike figure who leads in a more measured manner?"

He added that because Mr Trump appeared to have "only a passing grasp of policy", it would be important he appointed people with experience if he was elected.