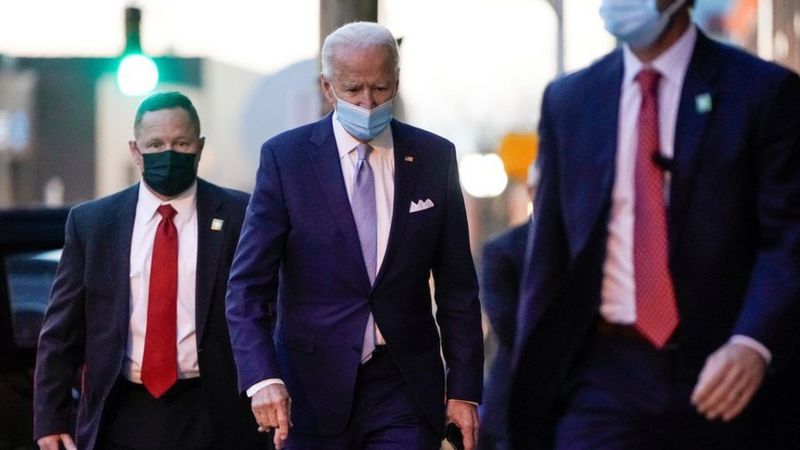 US President-elect Joe Biden has said outreach from the White House over the transition has been "sincere".

"It has not been begrudging so far, and I don't expect it to be," he told NBC News in an interview.

He spoke as he unveiled his choice of top officials for when he takes over from Donald Trump in January.

Yet he still refuses to admit defeat, repeating unsubstantiated claims that the 3 November vote was "rigged".

What did Biden say exactly?
Speaking to NBC's Nightly News, he confirmed he had not yet spoken to the president but added that he did not expect the beginning of his term to be affected by the delay in beginning the transition.

"It's a slow start but it's starting and there's two months left to go, so I'm feeling good about the ability to be able to get up to speed," he said.

There were, he said, plans for him to meet the Covid-19 task force in the White House about vaccine distribution and access.

As well as getting the Presidential Daily Brief - an update on international threats and developments - Mr Biden can now access key government officials and millions of dollars in funds as he prepares to take over on 20 January.

Barack Obama's former vice-president said that his time in office would not be a "third Obama term" because "we face a totally different world than we faced in the Obama-Biden administration".

"America is back" and "ready to lead the world, not retreat from it", he said when he introduced his future team.

He also told reporters he had discussed the Irish border issue with UK Prime Minister Boris Johnson and other leaders.

Mr Biden, who has Irish heritage, said he was against a guarded border, arguing it must be kept open: "The idea of having the border north and south once again being closed, it's just not right."

Who are his picks?
Mr Biden unveiled his selections for six key posts:

Antony Blinken, secretary of state. Mr Blinken said the US would soon "with equal measures of humility and confidence" restore its relationships with other countries

John Kerry, climate change envoy. He was one of the leading architects of the Paris climate agreement, from which President Trump withdrew. Mr Kerry said the world must "come together to end the climate crisis"

Avril Haines, would be first female director of national intelligence. Mr Biden said: "I picked a professional... a fierce advocate for telling the truth".

Alejandro Mayorkas, would be first Latino secretary of homeland security. Mr Mayorkas said the department had "a noble mission, to help keep us safe and to advance our proud history as a country of welcome"

Jake Sullivan, White House national security adviser. Mr Sullivan praised his boss, saying he had taught him much about statecraft, but also "most importantly about human nature"

Linda Thomas-Greenfield, US ambassador to the UN. She said she would bring her southern Louisiana roots to her job
One choice that is expected but has not been announced yet is former Federal Reserve chair Janet Yellen as treasury secretary

Most of the picks will need confirmation by the Senate, although not Mr Kerry or Mr Sullivan. Rejection of a nominee is rare.

Joe Biden's picks for the top roles in his administration have been celebrated by centrist Democrats: they speak glowingly of the diversity and experience of the individuals, a group that includes veteran foreign policy experts, and accomplished women and people of colour.

Yet progressives feel cheated. They say they helped Mr Biden win, and now they have been shut out of power.

These progressives say the cabinet will be filled with "Clinton and Obama retreads", as one of them puts it, describing it as a return to the "Blob", a term that Ben Rhodes, who served as Mr Obama's speechwriter, once used to describe the Washington establishment.

Stephen Wertheim from the Quincy Institute, a think tank focused on foreign policy, says the new Democratic team in the White House may end up acting like the old one, a group of centrists who, he says, focused more on military threats than on issues such as climate change. He adds: "Progressives have a right to be concerned about whether there will be significant change."