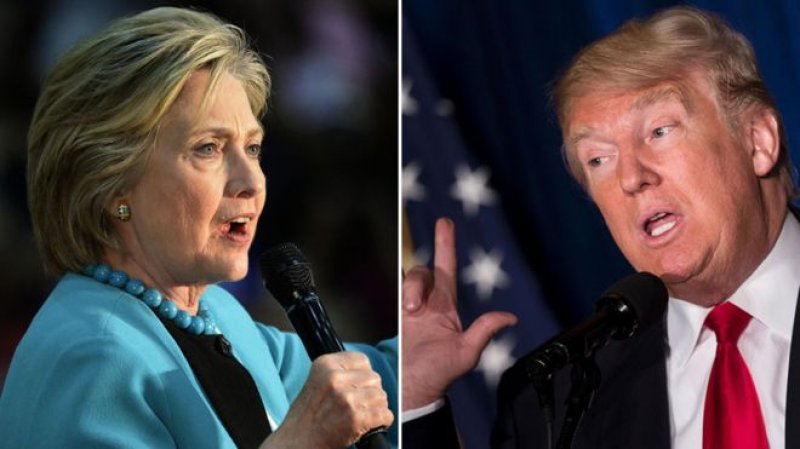 Republican presidential nominee Donald Trump has accused Democratic rival Hillary Clinton of being a "bigot" in his latest appeal to minority voters.

Speaking at a Mississippi rally, he said his opponent "sees people of colour only as votes not as human beings worthy of a better future".Mr Trump added that Mrs Clinton and the Democratic party had taken advantage of the African-American community.Mrs Clinton fired back, saying "he is taking a hate movement mainstream".The Democratic presidential nominee called out Mr Trump for questioning the citizenship of President Barack Obama and for failing to disavow former Ku Klux Klan leader David Duke, adding that he was "peddling bigotry and prejudice and paranoia".Mr Trump took aim at Mrs Clinton during a campaign stop in Jackson, Mississippi, on Wednesday, where he was joined by Britain's outgoing UKIP leader Nigel Farage.Mr Farage, who is viewed as a major force behind the UK's exit from the EU, told Trump supporters to "get your walking boots on" and begin campaigning.In recent days, Mr Trump has attempted to court African-Americans after failing to gain support among this key voting bloc.Only about 2% of black voters say they will vote for the New York businessman, according to current polls.Last week, Mr Trump made a direct appeal to black voters during a rally in Michigan, where he told a nearly all-white crowd that African-Americans "are living in poverty" and "their schools are no good".In an unscripted plea, he added: "What do you have to lose?"The New York billionaire's combined his minority outreach with his latest line of attack on Mrs Clinton in the deep-red state of Mississippi."She doesn't care what her policies have done to your communities. She has no remorse," he said on Wednesday. "She's going to do nothing for Hispanics and African-Americans."Mrs Clinton is due to speak later in Reno, Nevada, where she will accuse Mr Trump of "embracing extremism and presenting a divisive and dystopian view of America".The polls have the Democrat ahead nationally and in key states, with about 80 days to go before the election.