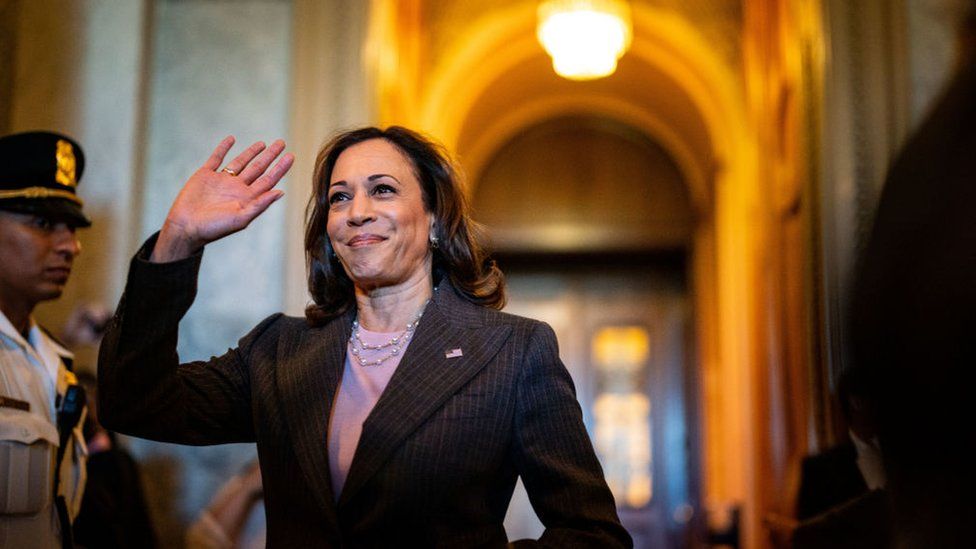 The US Senate has approved a sweeping $700bn (£577bn) economic package that includes major legislation on healthcare, tax and climate change.

The bill seeks to lower the cost of some medicines, increase corporate taxes and reduce carbon emissions.

The passing of the bill - a flagship part of President Joe Biden's agenda - is a boost ahead of mid-term elections.

But it is a significantly scaled-back version of the $3.5tn package that was first proposed by his administration.

The bill, a product of 18 months of intense wrangling, passed by a margin of 51 to 50 on Sunday with Vice-President Kamala Harris casting the deciding vote. It was previously blocked by two Democratic senators who shared Republican concerns about its cost.

It will now be sent to the Democratic-controlled House of Representatives, where it is expected to pass in a vote on Friday before the president can sign it into law.

The Inflation Reduction Act includes legislation that would allow the government to negotiate lower prices for prescription medicines provided under its Medicare health insurance programme for those aged over 65.

That is expected to save hundreds of billions of dollars over the next decade, according to estimates from the non-partisan Congressional Budget Office.

The package also includes a minimum 15% tax on most corporations that make more than $1bn a year in profits. That measure, an issue of contention during negotiations in Congress, is opposed by business groups who argue it will limit investment.

The bill also includes $369bn for climate action - the largest investment in the issue in US history.

Some households could receive up to $7,500 in tax credits to buy an electric car, or $4,000 for a used car. Billions will also be spent in an effort to speed up the production of clean technology such as solar panels and wind turbines.

There will also be $60bn given to communities that have suffered the most from fossil fuel pollution.

The authors of the bill say it will cut the country's carbon emissions by 40% by 2030.

The action on climate comes as the US experiences a wave of extreme weather, including a recent heatwave as well as deadly flooding in Kentucky that left dozens dead. President Biden visited flood-damaged areas of the state on Monday.

The world has already warmed by about 1.1C since the industrial era began and temperatures will keep rising unless governments around the world make steep cuts to emissions.

Democratic Senate majority leader Chuck Schumer said: "After more than a year of hard work, the Senate is making history. To Americans who've lost faith that Congress can do big things, this bill is for you."

Senator Brian Schatz, a Democrat from Hawaii, reportedly cried tears of joy as he left the chamber. "Now I can look my kid in the eye and say we're really doing something about the climate," he said, according to the New York Times.

Some Republicans have said they will try to stall or block the progress of the bill.

Florida's Republican Senator Marco Rubio argued it was out of touch as it did not help to lower prices for working people or keep criminals in jail - "the things working people in this country care about".

On Saturday, Congress debated a revised version of the bill, after compromises on the more ambitious original plan were agreed with two key Democratic holdouts, Senators Joe Manchin of West Virginia and Kyrsten Sinema of Arizona.

Mr Manchin had feared the original bill would have exacerbated inflation.

President Biden - who has called the bill "historic" - has pledged to return the US to the international stage on climate action. In April last year, he pledged to slash greenhouse gas emissions by at least 50% by 2030.