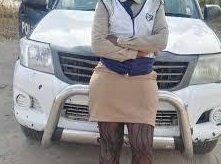 Female police officers in Zambia have been ordered to stop wearing miniskirts while on duty in order to protect the professional standing of the force, the state-owned Zambia Daily Mail newspaper reports.

The directive was issued by police assistant director for legal and professional standards, Charity Chanda, who said the Zambia Police Service had a prescribed length for women’s uniforms.

“What is the length of your skirt if you are a female police officer? We have seen many female officers wear miniskirts as uniform,” she is quoted as saying at an event on Tuesday.

It is aimed at protecting the professional standing of the service, ZPS said in a statement in Lusaka.

ZPS director of legal and professional standards, Charity Chanda, stated that the service would not allow female officers from dragging the integrity of ZPS in the mud.

Katongo said Police Officers should help in portraying the good image of the institution.

Katongo emphasized that their skirts should at least be under the knees because officers are supposed to be modest in their dressing and smart as opposed to what is in the picture circulating in various social platforms.

She added that no officer should take their dresses to the tailors aimed at reducing the size because it is against the police dress code and officers should comply with the Zambia Police dress code.