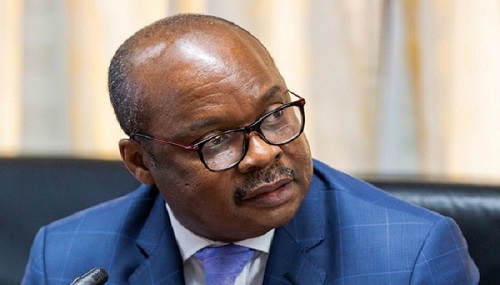 Governor of the Bank of Ghana (BoG), Dr. Ernest Addison, has assured the market that the rapid depreciation of the cedi against the US dollar will soon stabilise after a meeting with banks and forex bureaus concluded with workable plans.

According to the Governor, the recent sharp depreciation, which has seen the local currency plummet by more than 50 percent against the US dollar since the beginning of the year, is mainly due to speculation.

However, he mentioned that with the coming on stream of the US$750 million from the AfriExim Bank and US$790 million from COCOBOD syndicated loan, there will be enough forex supply for the market.

“Clearly, this type of movement does not reflect changes in the fundamentals. It is clear that the market is not functioning properly. We are seeing speculations taking over under very disorderly market conditions and it appears now the black market is rather driving exchange rates. This, we cannot allow to continue,” he said when he met managing directors of commercial banks and members of the Association of Forex Bureau Operators last Tuesday.

Dr. Addison also assured banks that the central bank has enough liquidity to supply into the system until conclusions with the International Monetary Fund (IMF) is concluded.

“I am aware of the recent developments in terms of liquidity in the banking sector. As I said, I took note of the advice from Washington on the financial stability issue that there has to be targeted liquidity support to preserve financial stability without undermining the inflation control objectives. So this is really the context we should have the discussion on all the complaints of we need liquidity and BoG not supplying liquidity.

Yesterday I met the CEOs and I have assured them that we will provide the necessary liquidity to ensure that we don’t have a system of a liquidity problem. But we do that within the context of keeping inflation low,” he said.

Dr. Addison further stated that the central bank is bent on restoring order in the forex market by making sure the interbank market takes full control to enforce regulations surrounding forex trading so as to streamline the supply of foreign currency in the country.

The Governor, therefore, charged the Association of Forex Bureau Operators to be law compliant and cautioned them to desist from determining forex rates which had contributed to the speculation of rates, thus, creating unnecessary panic in the market, contributing to the rapid depreciation of the local currency.

Members of the Association of Forex Bureau Operators commended the Bank of Ghana for its role in clamping down on illegal forex dealers, as they say it will bring some sanity in the sector and ensure only licensed forex operators deal in exchange transactions.

To this effect, the bank, on Thursday, revoked the licences of two forex bureaus in Accra for breaching provisions in the Forex Bureau Act.

The two companies – Trade House Forex Bureau Ltd and Aiport City Forex Bureau Ltd – which are under the same ownership, according to Head of Other Financial Institutions Supervision Department at the Bank of Ghana, Yaw Sapong, were not issuing electronic receipts and not taking identity cards of customers, a practice they have been previously cautioned about.