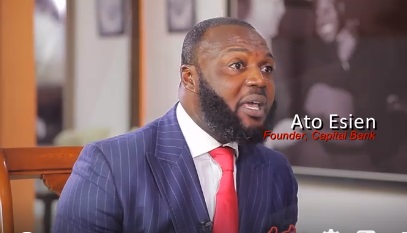 The Attorney General's office has described a refund agreement submitted by the founder of defunct Capital Bank William Ato Essien as totally unaccepted.

Marina Appiah Opare Chief State Attorney told the High Court on Thursday, June 18, 2020, that it had rejected the terms of a refund agreement submitted by Ato Essien.

She said the terms are not favourable to the state hence the rejection.

Mr. Essien and three others are facing 26 charges for various roles they played that led to the collapse of the financial institution.

His lawyers last month informed the Court presided over by Justice Eric Kyei Baffour that they are engaging the AG based on section 35 of the court’s act which allows for an offer of compensation or restitution in respect of some the charges brought against accused persons.

The lawyers revealed he has paid close to ¢1.4 million and also given out some 19 newly cleared cars from the port to the state.

The AG then confirmed the negotiations and informed the court that they will consider it.

The case was adjourned to June 18, 2020, but the AG's office says they have rejected the terms.

Ms Opare was, however, quick to reveal that the state has since received another proposal and was currently studying it.

She said the negotiation will only affect four of the charges so that should not stop the trial from proceeding.

Baffour Gyawu Bonsu Ashia, lawyer for Ato Essien urged the court to adjourn the case explaining that reaching an agreement will substantially affect the case.

Justice Kyei Baffour adjourned proceedings to July 9 saying should the state fail to reach an agreement the case will proceed.