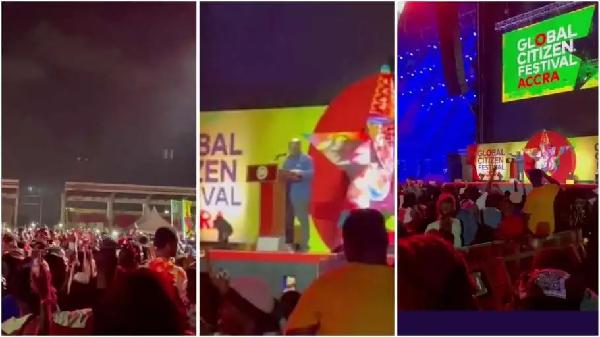 KT Hammond has lashed out at the youth after the unfriendly reception they gave to President Akufo-Addo at the Global Citizen Festival.

The Adansi Asokwa MP reacting to the incident described the youth as 'empty coconut heads' and said they should know their limit and learn to pay respect to the elderly.

According to him, the President did not say anything bad and wasn't even on a political platform to be treated that way.

He explained it is the elderly who are called to settle matters when there is an issue because of their wise counselling and not the empty-coconut heads youth.

He called on the youth to exercise patience and stop raining insults on the elderly because of politics.

He added that it's 'not possible for the country to be left in the hands of the youth to steer affairs' because the youth cannot run it.

President Akufo-Addo on Saturday was booed when he was delivering a speech at the 2022 Global Citizen Festival at the Black Star Square in Accra.

Akufo-Addo however finished his keynote address amidst jeering from the crowd. He spoke about the government of Ghana’s involvement in eradicating poverty and upholding national unity.

Started off his speech with, “Ladies and gentlemen, I extend a hearty Akwaaba, our word of welcome, from a very hospitable people. To all of you, who have come from afar and wide, to our vibrant city of Accra, Ghana’s capital, to join us on this great occasion.” His Excellency addressed the impact of climate change and the Russian-Ukraine war on the economy of Ghana and the world.