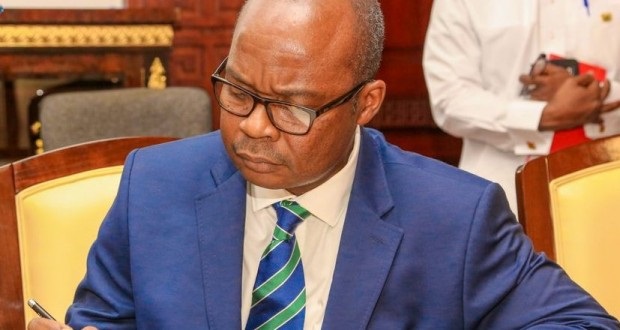 Challenges in the financial sector have taken a toll on the Bank of Ghana (BoG) leaving it to record a loss of ¢1.64 billion in 2017 had registered a profit before tax of ¢709.5million

reversal in the fortunes of the central bank, the lender of last resort in the banking industry, could partially be attributed to the regulator’s exposure to the collapsed UT and Capital banks, and that of other institutions such as uniBank, currently under the administration of KPMG, an auditing firm.

According to the bank’s 2017 Annual Report, it recorded an impairment position of ¢404 million in 2016 but that jumped by 208.49 per cent to ¢1.3billion in 2017. Analysis of the impairment performance points to the BoG’s liquidity support to these banks as the biggest contributors to the loss-making position.

The Central Bank, in August 2017, allowed the purchase and assumption of UT and Capital banks by GCB Bank. A month later the BoG increased the bank’s stated capital from ¢120 million to ¢400 million with a December 2018 deadline.

With experts realising liabilities from the purchase and assumption at over ¢2 billion, the government later issued a ¢2.1 billion bond to support the GCB Bank in its quest to safely take over the two banks.

In March 2018, the Bank of Ghana, in placing uniBank under the administration of KPMG, revealed that it had also extended ¢2.2billion to uniBank in liquidity support.

The Governor of the central bank, Dr. Ernest Addison, last week said that staff of the bank who presided over the collapse of UT and Capital banks will not be offered any protection by the bank indicating that already some key personnel are under investigation by the Economic and Organised Crime Organisation (EOCO) over their various roles.

The governor earlier this year commenting on the state of financial sector said, “as you would realise by now, poor banking practices, coupled with weak supervision and regulation by the Bank of Ghana has significantly undermined the stability of the banking and other non-bank financial institutions.

"We all know some of the consequences of now—revocation of licenses of two banks while other banks were placed under comprehensive capital restoration plans.

With top managers of the two banks under investigations by the necessary security agencies facing possible charges, the governor was questioned by the B&FT at the MPC press meeting regarding what punitive measures the bank’s staff, under whose watch the two banks collapsed, will face.

According to him, a comprehensive report on the collapse of the two indigenous banks has been submitted to EOCO, adding that “let’s see what EOCO would do with it.”

The Bank of Ghana, in its 2017 Annual Report, noted that despite the Purchase and Assumption (P&A) arrangement for two banks, the banking sector remained generally stable, solvent and liquid.

However, the year, according to the BoG, witnessed a deterioration of 4.3 percentage points in the Non-Performing Loans (NPL) ratio from the previous year’s ratio of 17.3 per cent.

“Following an Asset Quality Review () exercise conducted on the banks, a significant portion of the NPLs was fully provided for. If the fully provisioned loan loss category is written off, the NPL ratio reduces to 8.8percent,” the report said.