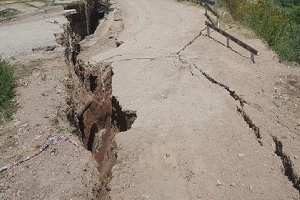 Some parts of Ghana's capital Accra have been marked as earthquake-prone zones.

Yesterday June 24 some of these areas experienced an earth tremor again a few minutes to 11:00 pm.

Reports indicate that the tremor was recorded in parts of the Greater Accra, Central and Eastern Regions.

Mawuli Zogbenu, a resident of Weija said he experienced the earth three times.

“It started at exactly 10:48 pm. Initially, we thought because it was a rainy season, it was normal. But it happened again in a few seconds. And it happened the third time. As I speak with you a lot of families are out of their rooms trying to look for safety places,” he said in an interview.

These tremors were recorded mostly in Accra, the capital.

In 2019 on Saturday, March 2 an earth tremor with a 3.9 magnitude on a Richter scale according to the Ghana Geological Survey Authority was experienced in Accra.

A senior official at the Ghana Geological Survey Authority, Nicholas Opoku said the 3.9 magnitude recorded is the highest in 2019.

He said the Survey Authority recorded 2.6 magnitude on the Richter scale on January 13, 2019, and 2.8 on February 25, 2019, with the third pointing to increased seismic activity within Accra.

“As for bigger earthquakes, one day it will come but as to when is always a problem that semiologist has not been able to unravel”.

He said within the seismological community increasing magnitude can mean the worst is ahead.

Mr Opoku advised that the best way to handle an earthquake is to “build resilience” and explained Ghana would have to take a closer look at areas where the risk is very high and consider evacuation.

Research work dating back to 1981 indicates that most of the earthquakes in Ghana occur in the western part of Accra at the junction of the two major fault systems namely, the Coastal boundary fault and Akwapim fault zone.

According to the research, most of the epicentres are located south of Weija suggesting that there is little activity north-eastward along the Akwapim range and westward along the Coastal boundary fault.

The magnitude recorded so far in 2019 is still a distance from 6.5 magnitude, highest ever recorded in 1939 in which 17 were killed in Accra.

What is an earth tremor

An earth tremor is a relatively small or short-lived movement of the earth’s surface caused by the same forces that produce earthquakes. Earth tremors are strong enough to be felt by people.

Scientists say earth tremors can occur when the force exerted on the rock mass exceeds its strength.