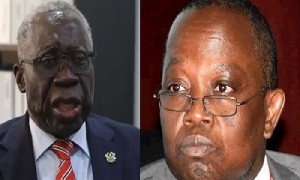 The Chief Justice, Anin Yeboah has requested the dockets on the case involving the Senior Minister, Yaw Osafo Maafo and the Auditor-General, Daniel Domelovo.

This was revealed on Monday by Justice Boakye Adjei, the High Court judge hearing the case.

It is unclear why the Chief Justice has called for the dockets but his decision means the cases have been placed on hold till further directives from him.

The Senior Minister, Mr Yaw Osafo Maafo and four other officials from the Ministry of Finance initiated a court action against the Auditor-General, Mr. Daniel Yaw Domelevo to clear their names in relation to what is said to be breaches of the Public Procurement Act (PPA) that resulted in their payment of US$1 million to a private firm, Kroll and Associates.

The Auditor-General had concluded that Kroll was paid for no work done, following what he said was the persistent failure of the Senior Minister to provide proof of actual work done.

Domelevo consequently recommended Disallowance of the payment of the US$1million to Kroll and Associates, which the government, through the Ministry of Finance paid.

Mr Domelevo also surcharged the Senior Minister, Mr Osafo Maafo and four other officials from the Ministry of Finance.

The Auditor-General had indicted the Ministry of Finance and the Senior Minister for paying the UK firm, Kroll and Associates Limited, in 2017 to recover assets from identified wrongdoers, among others, without verifying outcomes.

Mr. Osafo Maafo in a statement said he was resorting to the courts because â€œthe evidence available shows clearly that the Auditor-General erred in law and professional procedures in the exercise of his powers regarding his audit on payments to Kroll and Associates Limited.â€

â€œI have on Wednesday, 11th December 2019, instructed my lawyers to commence legal processes to challenge a Disallowance and Surcharge imposed on me by the Auditor-General following his notice on 24th October 2019.