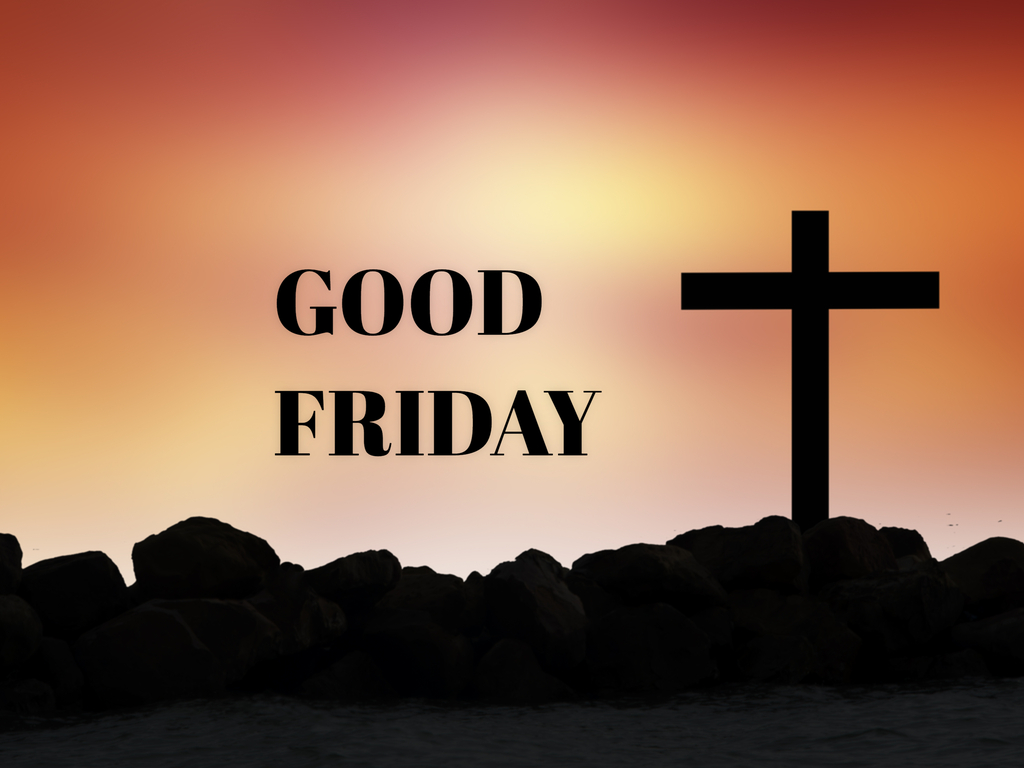 Good Friday is a Christian holiday commemorating the crucifixion of Jesus and his death at Calvary.

It is observed during Holy Week as part of the Paschal Triduum on the Friday preceding Easter Sunday and may coincide with the Jewish observance of Passover. It is also known as Holy Friday, Great Friday, and Black Friday.

The date of Good Friday varies from one year to the next on both the Gregorian and Julian calendars. Eastern and Western Christianity disagree over the computation of the date of Easter and therefore of Good Friday. Good Friday is a widely instituted legal holiday around the world, including in most Western countries and 12 U.S. states.

Some countries, such as Germany, have laws prohibiting certain acts, such as dancing and horse racing, that are seen as profaning the solemn nature of the day.

According to the accounts in the Gospels, the royal soldiers, guided by Jesus' disciple Judas Iscariot, arrested Jesus in the Garden of Gethsemane. Judas received money (30 pieces of silver) (Matthew 26:14â€“16) for betraying Jesus and told the guards that whomever he kisses is the one they are to arrest. Following his arrest, Jesus was taken to the house of Annas, the father-in-law of the high priest, Caiaphas. There he was interrogated with little result and sent bound to Caiaphas the high priest where the Sanhedrin had assembled (John 18:1â€“24).

Conflicting testimony against Jesus was brought forth by many witnesses, to which Jesus answered nothing. Finally, the high priest adjured Jesus to respond under solemn oath, saying "I adjure you, by the Living God, to tell us, are you the Anointed One, the Son of God?" Jesus testified ambiguously, "You have said it, and in time you will see the Son of Man seated at the right hand of the Almighty, coming on the clouds of Heaven." The high priest condemned Jesus for blasphemy, and the Sanhedrin concurred with a sentence of death (Matthew 26:57â€“66). Peter, waiting in the courtyard, also denied Jesus three times to bystanders while the interrogations were proceeding just as Jesus had predicted.

In the morning, the whole assembly brought Jesus to the Roman governor Pontius Pilate under charges of subverting the nation, opposing taxes to Caesar, and making himself a king (Luke 23:1â€“2). Pilate authorized the Jewish leaders to judge Jesus according to their own law and execute sentencing; however, the Jewish leaders replied that they were not allowed by the Romans to carry out a sentence of death (John 18:31).

Pilate questioned Jesus and told the assembly that there was no basis for sentencing. Upon learning that Jesus was from Galilee, Pilate referred the case to the ruler of Galilee, King Herod, who was in Jerusalem for the Passover Feast. Herod questioned Jesus but received no answer; Herod sent Jesus back to Pilate. Pilate told the assembly that neither he nor Herod found Jesus to be guilty; Pilate resolved to have Jesus whipped and released (Luke 23:3â€“16).

Under the guidance of the chief priests, the crowd asked for Barabbas, who had been imprisoned for committing murder during an insurrection. Pilate asked what they would have him do with Jesus, and they demanded, "Crucify him" (Mark 15:6â€“14). Pilate's wife had seen Jesus in a dream earlier that day, and she forewarned Pilate to "have nothing to do with this righteous man" (Matthew 27:19). Pilate had Jesus flogged and then brought him out to the crowd to release him.

The chief priests informed Pilate of a new charge, demanding Jesus be sentenced to death "because he claimed to be God's son." This possibility filled Pilate with fear, and he brought Jesus back inside the palace and demanded to know from where he came (John 19:1â€“9).

Coming before the crowd one last time, Pilate declared Jesus innocent and washed his own hands in water to show he had no part in this condemnation. Nevertheless, Pilate handed Jesus over to be crucified in order to forestall a riot (Matthew 27:24â€“26) and ultimately to keep his job. The sentence written was "Jesus of Nazareth, King of the Jews." Jesus carried his cross to the site of execution (assisted by Simon of Cyrene), called the "place of the Skull", or "Golgotha" in Hebrew and in Latin "Calvary". There he was crucified along with two criminals (John 19:17â€“22).

Jesus agonized on the cross for six hours. During his last three hours on the cross, from noon to 3 pm, darkness fell over the whole land.[14] Jesus spoke from the cross, quoting the messianic Psalm 22: "My God, my God, why have you forsaken me?"

With a loud cry, Jesus gave up his spirit. There was an earthquake, tombs broke open, and the curtain in the Temple was torn from top to bottom. The centurion on guard at the site of crucifixion declared, "Truly this was God's Son!" (Matthew 27:45â€“54)

Joseph of Arimathea, a member of the Sanhedrin and a secret follower of Jesus, who had not consented to his condemnation, went to Pilate to request the body of Jesus (Luke 23:50â€“52). Another secret follower of Jesus and member of the Sanhedrin named Nicodemus brought about a hundred-pound weight mixture of spices and helped wrap the body of Jesus (John 19:39â€“40). Pilate asked confirmation from the centurion of whether Jesus was dead (Mark 15:44). A soldier pierced the side of Jesus with a lance causing blood and water to flow out (John 19:34), and the centurion informed Pilate that Jesus was dead (Mark 15:45).