Thousands of Burkinabes seek refuge in Ghana due to unrest 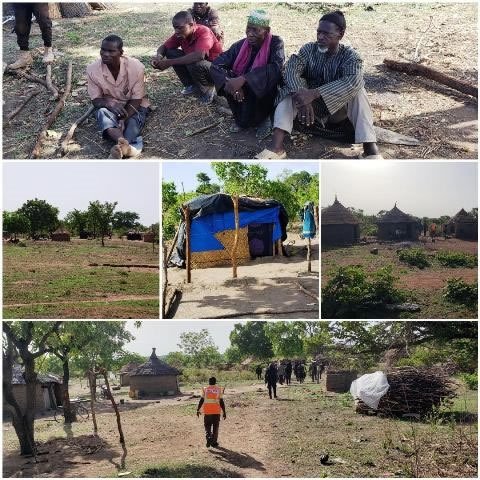 Thousands of Burkinabes seek refuge in Ghana due to unrest
Shares

Over 1000 migrants from northern Burkina Faso have entered Ghana to seek refuge over alleged unrest in the Francophone West African country.

The migrants, believed to be of Moshie descent from northern Burkina Faso suspected to have no official documentation resident or travelling permits have been settling along the Tumu-Navrongo stretch up to Wuru, Kwapun, Banu, Pido, Kunchorkor and Basisan towards River Sissili which divides the Upper West region from Upper East.

Discovery of the illegal immigrants followed months of Ghana News Agency investigations that tracked unusual movements of foreigners into the country along the Ghana-Burkina Faso border as well as unapproved routes aided by local landlords without recourse to the laws of Ghana.

A combined team of top security officials led by the Sissala East Municipal Chief Executive, Mr Karim Nanyua, visited the settlements on Friday to ascertain what might have triggered the influx.

At Kunchorkor, the team got to their homes at about 0800 hours where most of the settlers had left for their farms leaving behind only children and few women as their doors were locked.

In Banu, Zono (Zongo) has been given as the name of the newly established suburb with over hundred mud structures roofed with thatches; inhabiting over 200 inhabitants lived there.

A leader of one of the settlements, Alhaji Tijani Mamudu 59, said they came from Soum whilst another leader Issaka Mamudu 62years also said they travelled from Kumbisi both in Burkina Faso with the aim of finding a place to settle and farm.

“We’re hoping many of our kinsmen will join us, “ Mamudu added

A few of them indicated that they have stayed for the past five years but, the large majority of them started joining the camps few months ago.

“We cultivate sesame and maize crops after, which we pay royalties to the (Ghanaian) landowners,” one settler said.

They depend on the boreholes of the communities for drinking and cooking and other existing social amenities thereby, putting pressure on the facilities.

In Pido the next community where they numbered over 100 with many of their houses still under construction had 15 of the buildings completed serving as homes adjacent to the Chief Palace overseeing the Tumu Navrongo Highway.

Moussa Iddrisa Zore, believed to be in his early 40s and one of the leaders, who had lived in Pido for a month, told the team that they came from Soum Arabinda lying on the border between Niger and Burkina Faso but were being harmed and attacked by suspected criminals.

He said in most cases, their properties were being taken away, saying, “So we decided to come to Ghana through Leo, and if people ask, we tell the authorities in Burkina that they are killing us and that is why we are running”.

Oudragou Haruna, 40 years, said: “When we get a place, we tell our people where we have settled so, they can come, we believe many more will come, we intend to use here as our homes”.

Reports from the area also indicated that the large arable land could be the reason for the increasing numbers of Burkinabe nationals moving into the geographical area.

One of the landlords, Sumaila Adams told the GNA each farmer paid one bag of sesame at the end of every season to landlords after pacifying the land.

The quest to get these royalties had triggered several disputes among local residents over land boundaries.

The Assemblyman, Mr Mahmoud Sumaila said, he asked landlords in Banu, Kunchorkor, Basisan and Pido to inform authorities about the settlers but the directive was met with stiff opposition making it difficult for him to even visit some of the communities.

Several local farmers have also started complaining of their farmlands being taken away whilst women in Pido and other communities expressed fear of rape due to the huge number of foreigners invading the area.

The Chief of Pido Mahama Wiamua told the team that when he was asked why he received and settled the foreigners without telling the authorities, he pleaded and said he would no longer accept any new person until their situation was sorted out.

Superintendent Samuel Donkor, the Sissala East Municipal Commander of Ghana Immigration Service, told the GNA that the foreign settlers may have to be profiled to establish whether they are asylum seekers.

They would then be classified as refugees and referred to the United Nations High Commission for Refugees.

The Sissala East Municipal Chief Executive Mr Karim expressed unhappiness about the chiefs and landlords for keeping the foreigners without informing the appropriate authorities and pledged to report the matter to higher authority for action.

The Member of Parliament, Mr Abbas Ridwan Dauda, called on the Chiefs to ensure they kept information of everyone in the enclave and preserved peace and unity as the Ministry of the Interior had been informed about their presence.

“There are more unapproved routes into the Sissala East and Immigration Service currently, does not even have a means of transport, so I am appealing to the Ministry of Interior to as a matter of urgency, resource the immigration service in the area and security services in general to enable perform their duty as expected,” he added.