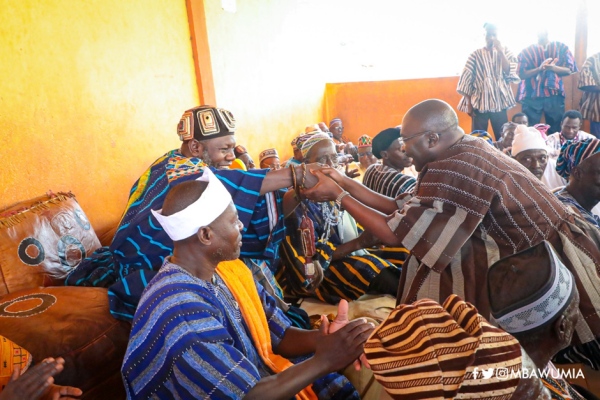 The Paramount Chief of Bunkpurugu Traditional Area Naba Alhaji Abuba Nasinmong, has urged the Vice President, Dr. Mahamudu Bawumia, to focus on his good works for the country and not be discouraged by the negativity of his opponents, who he said, will always find negative things to say about the Vice President.

Welcoming Dr. Bawumia, who is on a working visit of the north, to his Palace on Tuesday, the Bunkpurugu Naba, commended the Vice President for his "indefatigable leadership," and the recognition he has given to the people of Bunkpurugu and the north in general, adding that God will crown his efforts.

"I am excited having you present at my Palace, once again, to pay a courtesy call on me and my people in the Bunkpurugu Traditional Area. We are highly delighted having you with us today, because of the recognition you have given us as a people in this part of our country," Naba Abuba Nasinmong, who was flanked by his elders and indigens of the community, said.

READ ALSO: Your quest to harmonise our country's religious diversity is commendable - Ya-Naa to Bawumia

"You are a true stateman and an astute modern politician who has efficiently aided the first gentleman of the Ghanaian State, His Excellency Nana Addo Dankwa Akufo-Addo to maintain law and order, peace and tranquility and implementation of people centred policies that have touched the life of every Ghanaian, especially in the Bunkpurugu - Nakpanduri District such as Free SHS policy, Planting for Food and Jobs, extension of electricity, improvement on our roads, etc."

As he lauded Dr. Bawumia and the Akufo-Addo Government, he expressed his support and "wholehearted" encouragement to the Vice President not to be discouraged by the negativity of his critics.

"Permit me to wholeheartedly express the following: your opponents would always find negative things to say about you, but continue with your good works and Almighty God will grant you victory.

"I wish to, on behalf of my people, assure you of our maximum support."

The Vice President has been on a working tour of the norther part of the country since Sunday.

After touring the Northern Region on Sunday and Monday, paying courtesy calls on traditional leaders and inspecting on-going Government projects, the Vice took his tour to the North East Region on Tuesday.

The Government's construction of Agenda 111 District hospitals are among key Government projects the Vice President has been inspecting on his tour.