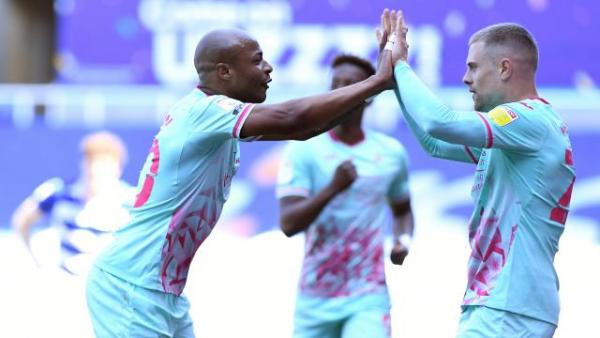 Steve Cooper hailed the impact of Andre Ayew after the Ghanaian came off the bench to help Swansea City secure a Championship play-off spot.

Needing a point to guarantee a top-six finish, Ayew came on in the 65th minute with the Swans trailing to Yakou Meiteâ€™s header.

But the Ghanaianâ€™s first involvement saw his backheel spring Jay Fulton in on goal, with Jamal Lowe finished after the Scotâ€™s initial shot was saved.

Ayew then went from provider to scorer as he calmly took a touch before converting Jake Bidwellâ€™s cut-back with seven minutes to go.

Reading would level in stoppage time through Tomas Esteves, but the point saw Swansea make it back-to-back trips to the play-offs in what was Cooperâ€™s 100th game in charge.

And, while Cooper acknowledged the contribution made by the whole team during the game, he had plenty of praise for man-of-the-match Ayew.

â€œAll the subs played their part, Connor Roberts and Korey Smith have regularly started for us, and Morgan Whittaker is a young lad doing well for us," said Cooper.

â€œWe knew Wayne Routledge and Liam Cullen would not play 90 minutes, they both did well for us and we knew we would need our bench.

â€œAndre is a really good player and person, he thrives on being the big player and we are very happy to have him.

â€œThe team comes first, not himself, and you could see that today.

â€œIt would have been great if we didnâ€™t need him, as it would have meant we were comfortable in the game.

â€œBut we did, he was medically cleared to play 30 minutes, and it ended up being a good move thanks to the good work from Andre and the medical team.

â€œIt helped get the result we wanted.â€