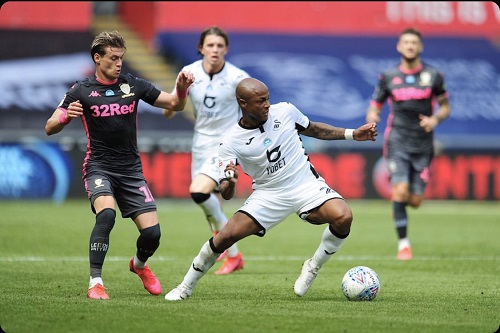 Swansea City attacker Andre Ayew decided to focus on the positives despite seeing his team lose to Leeds United on Sunday.

Substitute Pablo Hernandez decided the game thanks to his 89th-minute effort to silence the Swans at the Liberty Stadium.

The 30-year-old Ghana captain Ayew who was in action from start to finish but his presence could not give his team the desired result has expressed his disappointment over the defeat.

Tough one to take..team spirit was top.. didn’t get what we deserved .. we still in !we keep believing!⚪️⚫️ pic.twitter.com/tTUY9Ki6AM

Swansea head coach Steve Cooper also felt his team should have scored in the game.

"We felt comfortable in the game. They probably had a couple more clear chances than we did, but I thought we got into as many good areas as them.

"We're really disappointed to concede like we did that late on. It's a tough one to take, but we've quickly got to get over it. There are still points to play for.

"Whether we had drawn or won today, we still would have had to pick up points in the remaining games.

"There were lots of good bits from the performance. I'd have liked us to keep the ball a bit more if I'm honest. I felt like a set-piece might decide it, whether it was for us or them. Both teams set up tactically well so for them to get through at the end is obviously disappointing."