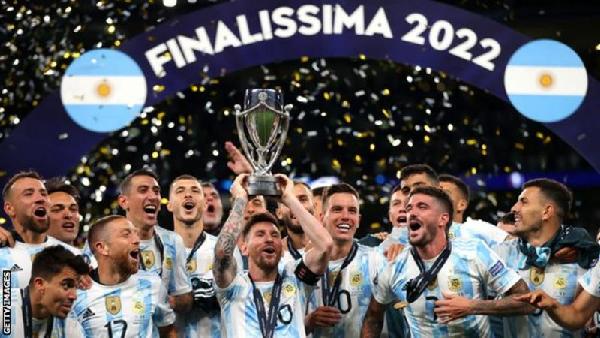 Lionel Messi and Angel di Maria shone as Argentina beat Italy at Wembley in the Finalissima - a renewal of the contest between the champions of Europe and South America.

Messi's run and cross set up the opener for Lautaro Martinez, who then turned provider for Di Maria to chip a second.

Italian defender Giorgio Chiellini played the first half of what was his 118th and final international match.

The contest is the first between the two continental champions in 29 years.

It is a revival of the Artemio Franchi Cup, competed for twice before - in 1985, when France beat Uruguay and in 1993, when Argentina beat Denmark on penalties.

Argentina's victory continues their remarkable run of results since June 2019 - they are unbeaten in 32 matches, winning their first Copa America since 1993 and cruising through qualification for the World Cup in Qatar in the process.

Their side at Wembley showcased a host of elite global talent, including a stellar front three of Di Maria, Martinez and Messi, who were a menace throughout with their movement and neat interplay.

It was Di Maria and Messi who truly stood out, however, staging their own mini contest with Paris St-Germain club-mate and Italian goalkeeper Gianluigi Donnarumma in what became an increasingly one-sided affair.

Inside two minutes, Di Maria was attempting to lob Donnarumma from close to halfway. By the end of the first half, he had scored a magnificent chip to follow up Martinez's opener, created by a typically untouchable Messi run and cross.

Italy were simply grateful to their keeper for the string of impressive saves he made to keep the scoreline respectable, before Dybala fired in low with the last kick of the game.

Behind Argentina's front three, Giovani lo Celso and Rodrigo de Paul were a constant source of energy and positivity while Nicolas Otamendi and Cristian Romero provided grit and guile when needed at the back.

It is 36 years since Argentina won the World Cup. With this side, marrying its undoubted talent with a supreme work-rate, they would appear to have an excellent chance of ending their wait for a third global crown.

For Italy, Wednesday's game could have been a celebration - a return to the scene of their Euro 2020 triumph and a chance to say goodbye to one of the modern game's great defenders.

Instead, what started out as a bitter-sweet occasion ended as a chastening one.

The Azzurri know it will be at least four years before they have the chance to face elite non-European opposition such as Argentina in a competitive fixture again. They also now know just how wide the gulf is between themselves and such sides.

Their failure to qualify for this year's World Cup - the second in a row they will have missed - is undoubtedly a huge blow to a nation that had come so far under the management of Roberto Mancini and would have fancied their chances in Qatar.

It was only nine months ago that they recorded the longest unbeaten run in international football - 37 matches, during which they won the Euros for the second time in their history.

But as the shock play-off defeat by North Macedonia made abundantly clear, theirs is a side in clear need of renewal - a process possibly better enabled by being away from the pressures of competing at a major tournament in the middle of another gruelling domestic season.

The process has already begun. Roberto Mancini's matchday squad had an eye on the future, including inexperienced 23-year-olds Alessandro Bastoni and Gianluca Scamacca and a fourth start for 22-year-old forward Giacomo Raspadori.

His hand has also been forced, with Chiellini departing the international stage after a typically combative 45 minutes, taking 118 caps' worth of experience with him.

Further changes and experiments will come, but so do stern fixtures in the shape of Germany, Hungary and England in the Nations League.

For Argentina, the sky is the limit; for Italy things may get worse before they get better.