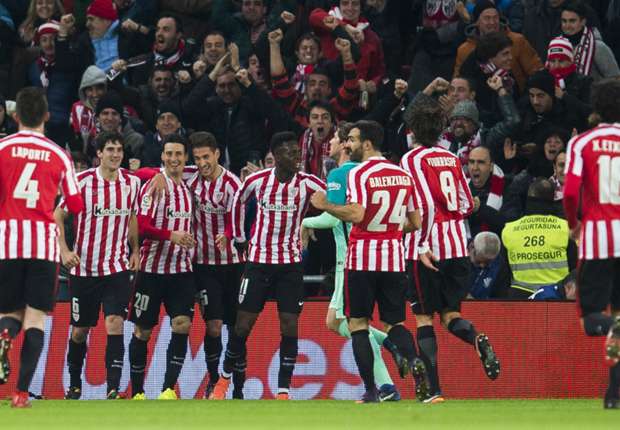 Barcelona must come from behind in the Copa del Rey as the holders began 2017 with a tempestuous 2-1 defeat to nine-man Athletic Bilbao in the first leg of their last-16 tie.

Evergreen striker Aritz Aduriz headed Athletic in front and set up a thunderous second from winger Inaki Williams before the half-hour mark.

But the Spain striker found himself at the centre of a flashpoint that sent a crackling San Mames towards boiling point when he struck Samuel Umtiti in the throat only to escape punishment, as the Barcelona centre-back writhed in pain by his own goalmouth.

Referee Fernandez Borbalan further endeared himself to away boss Luis Enrique, with one of the surest penalty shouts of Neymar's career falling on deaf ears before Barca's players departed for half-time amid a hail of bookings for dissent.

Lionel Messi's 24th goal of the season arrived courtesy of an error by Athletic goalkeeper Gorka Iraizoz and, although Raul Garcia and Ander Iturraspe had their evenings ended early by wayward disciplinarian Borbalan, Athletic held out.

Luis Enrique's Barca must attempt to conclude a comeback at Camp Nou in six days' time, on the other side of a tricky La Liga trip to fourth-placed Villarreal.

Barca gradually settled into their passing rhythm and, with pressure building, Messi smashed wide from the edge of the box.

A mishit clearance from Iraizoz allowed Andres Iniesta to find Messi on the right flank and Gerard Pique headed wide under pressure from the Bilbao keeper.

Despite the visitors' growing poise, it was Ernesto Valverde's men who drew first blood in the 25th minute.

Aduriz laid a pass into Garcia's path down the right channel and continued his run to nod home a simple finish at the far post.

Before Barcelona had a chance to clear their heads they were stung again – Jordi Alba's poor hack out from left-back was headed back towards the area by Iturraspe, where Aduriz's impudent flick was gleefully lashed into the top corner by Williams.

The flashpoint with Umtiti should have resulted in Athletic's talisman receiving his marching orders but he escaped censure, at least until laughing when the France international continued the argument and Borbalan belatedly booked both parties.

After Mikel Balenziaga failed to pick out Williams for a third Bilbao goal, Borbalan continued his eventful end to the half by denying Neymar a clear penalty when the Brazil star was brought down Xabier Etxeita and booking Alba, Iniesta and Sergio Busquets for their complaints.

Barca were thrown a lifeline in the 53rd minute as Iraizoz weakly parried Messi's free-kick and fumbled out from behind his line – his protests to the browbeaten Borbalan coming more in hope than expectation.

Aduriz resumed centre stage 10 minutes later when Marc-Andre ter Stegen kept out his delicate chip, while Iraizoz's regained some of his poise with an excellent save from Neymar.

The hosts played out the final 10 minutes with nine men as Garcia and Iturraspe saw Borbalan's liberally brandished yellow card for a second time after fouls on Neymar.

Somehow Athletic held out, with San Jose performing a scarcely believable last-ditch challenge on Messi and the five-time Ballon d'Or winner striking the inside of the post deep into stoppage time. (Via: Goal.com)