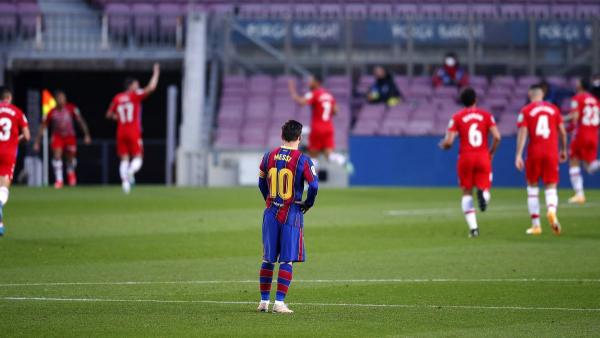 Barcelona missed the chance to move to the top of La Liga as Granada produced a sensational second half comeback to claim a 2-1 win at Camp Nou.

Ronald Koeman’s side had won 15 of their last 17 league matches, a run which has seen them enter title contention, but two goals in 16 minutes from Granada keeps the Catalans in third place, two points off Atletico Madrid and level on points with Real Madrid.

A strong start by Barca saw them take a firm grip of the game early on and that dominance was reflected in the opener Messi scored after 23 minutes, firing across goal and into the far corner of the net after an intricate move on the edge of the box.

Messi should have doubled his tally just moments later, but was thwarted by Granada goalkeeper Aaron Escandell who tipped a shot from a one-on-one situation around the post.

Barcelona continued to dominate, but Granada found a surprise equaliser against the run of play after 63 minutes when Darwin Machis broke in behind to squeeze home a finish at the near post.

Koeman was shown a red card on the touchline as frustration got the better of him and his mood wasn’t helped by what soon followed, with Granada taking a shock lead through Jorge Molina, who lost his marker to head a winner past Marc-Andre ter Stegen.