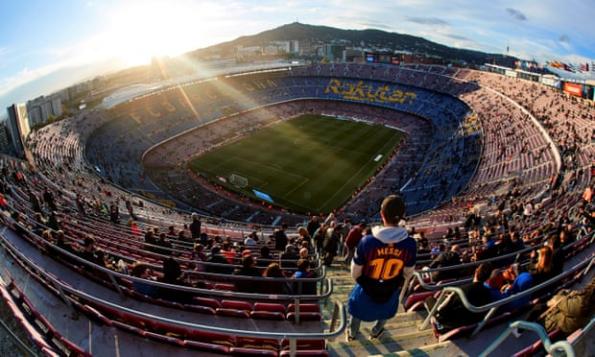 For the first time in its 63-year existence, Barcelonaâ€™s stadium will have a formal name after the club announced plans to sell next seasonâ€™s title rights and hand the proceeds to charitable activities and the fight against coronavirus.

The Camp Nou, which means the new ground, became theÂ de factoÂ name of BarÃ§aâ€™s home after it was inaugurated in 1957, later rubber-stamped in a membersâ€™ referendum. Now it will get a â€œsurnameâ€ as the club seeks a sponsor for 2020-21 â€“ a first step towards the sale of the naming rights as construction begins on a new 105,000-capacity stadium which they hope to have completed on the same site in the next four years. The current Camp Nou is Europeâ€™s largest football stadium.

BarcelonaÂ announced on Tuesday that they would cede the title rights to the clubâ€™s charitable foundation, which would manage the process. They hope to find a sponsor in the coming weeks and plan for part of the money raised to go towards charities involved in the investigation of Covid-19. Other charities, chosen by the sponsor and the foundation, would also benefit. The deal will last for a year, after which the search for a permanent title holder would continue. Barcelonaâ€™s stadium has never had a title, still less a commercial one.

This move is reminiscent of Barcelonaâ€™s decision to name Unicef as its first ever shirt â€œsponsorâ€ in 2006. Rather than being paid, Barcelona contributed â‚¬1.6m a year to carry Unicefâ€™s name, serving as a soft launch for commercial sponsors thereafter, beginning with the Qatar foundation and then Qatar Airways.

Barcelona said that the measures fit their claim to be â€œmore than a clubâ€ and that they hoped to be able to â€œcreate a wave of hope for millions of people around the world who are suffering due to this pandemicâ€. A statement described this as a â€œglobal crisis without precedentsâ€ during which Barcelona have to â€œassume responsibilityâ€.

â€œWe are very happy to be able to drive forward this initiative that offers something as emblematic as the name of our stadium so that institutions, organisation, businesses, who wise [sic] may associate themselves with it and as such contribute to the fight against Covid-19 given that their investment will be used to finance research projects on the illness and projects that are working to eradicate to lesson its effects,â€ the statement said.