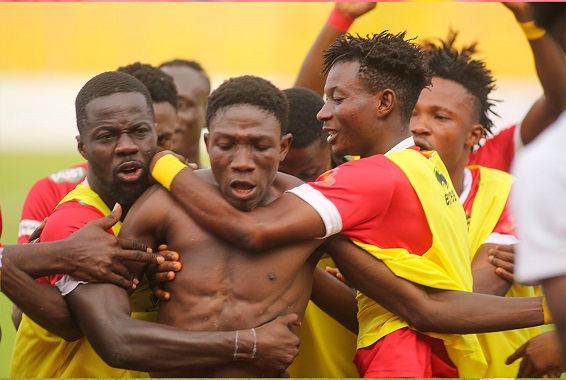 The lead lasted until the 78th minute when Kotoko’s pressure paid off. Nicholas Mensah scored his second goal of the season as he tapped home from close range after the goalkeeper failed to keep hold of Mukwala’s free kick in the 78 minute.

The visitors were dealt a blow in the 86 minute after Seidu Abubakar was sent off for a second yellow card.

Augustine Agyapong smashed home the resulted free kick to give the Reds the points at home.

The win takes Asante Kotoko to the third spot with 10 points – three points adrift of leaders Aduana FC who are at the top with 13 points.

Real Tamale United handed Berekum Chelsea their first defeat of the season after beating them 2-1 at the Golden City Park at Berekum. The Northern giants had been without a win in their opening four games -after two defeats and two draws thus far.

David Abagna Sandan drew the first blood in the 11 minute for RTU. While looking for the equalizer, Roland Frimpong added the second goal to deepen the woes of Chelsea.

Bibiani Gold Stars picked all the points at home as they swept aside King Faisal 2-1 to deepen their woes. Laar Ibrahim scored a brace on the day at DUN’S Park to give the miners all the spoils. The former Eleven Wonders attacker opened the scoring in the 32nd minute before adding the second goal four minutes later. King Faisal who have yet to win a match in the season pulled one back through Haruna Mohammed who converted from the spot in injury time.

Former Champions Aduana FC beat Legon Cities 1-0 at the Nana Agyemang Badu Park to reclaim the top spot. Isaac Mintah scored the only goal of the match in the 38 minute to give the Ogya lads another home win.

At Aiyinase - Karela United pip Bechem United 1-0 at the Crosby Awuah Memorial Park. Enoch Agbenyo scored in the 30 minute to give hi side the three points – their second win of the season.

On Saturday, Accra Lions scored two first half goals to beat Nsoatreman 2-0 at the Accra Sports stadium. Daniel Awuni headed home Remember Boateng’s cross for the opener in the 10 minute before Frederick Asante added the second goa in the 41 minute.

In Cape Coast – Daniel Afriyie Barnieh scored from the spot to give Hearts of Oak a 1-0 win over Kotoku Royals Rush FC.
Earlier on Friday – Dreams FC drew goalless with Tamale City FC at the theatre of Dreams – Dawu.

On Monday, Accra Great Olympics will host Medeama SC at the Accra Sports stadium to round up the Matchday five fixtures. 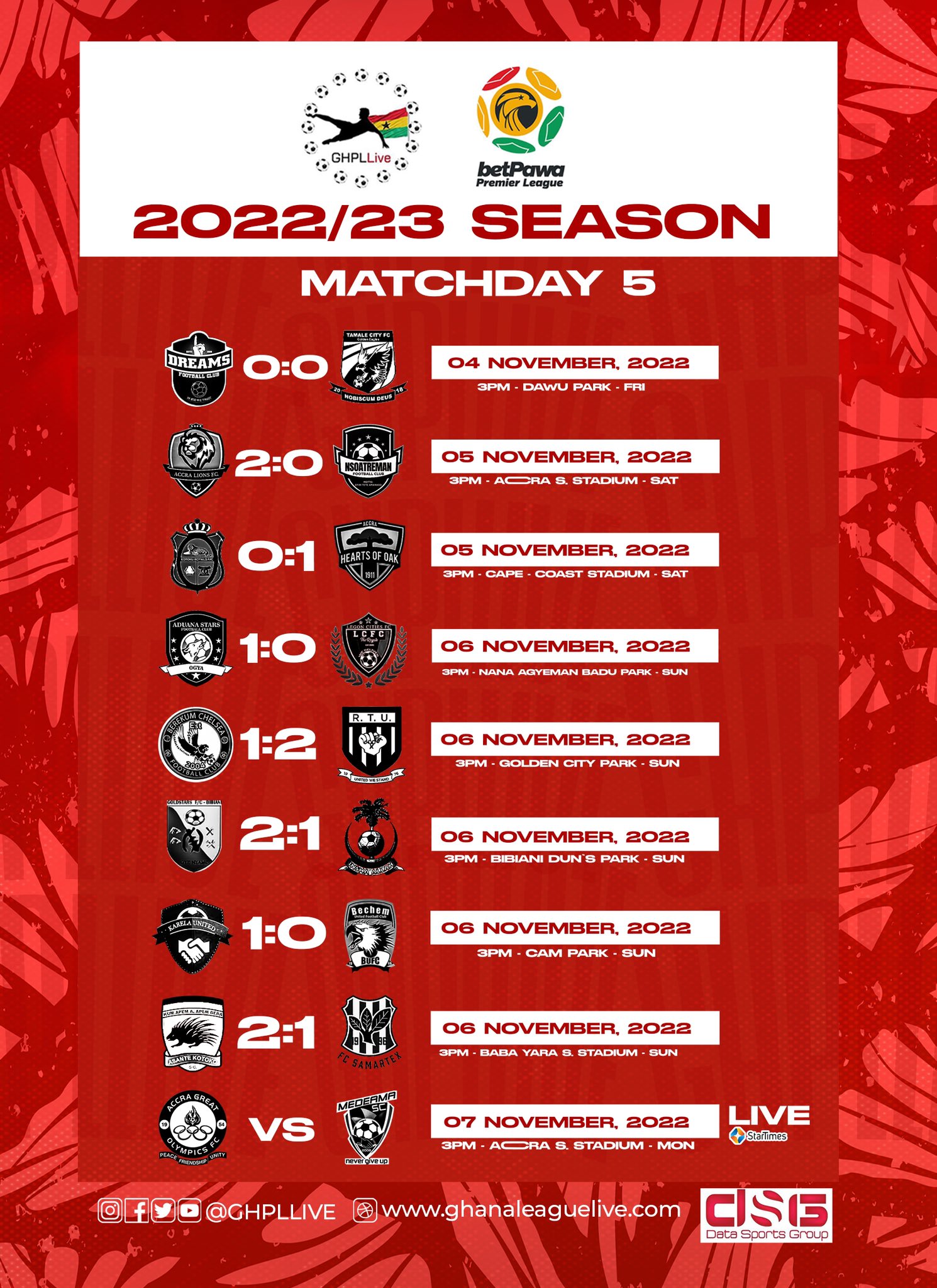 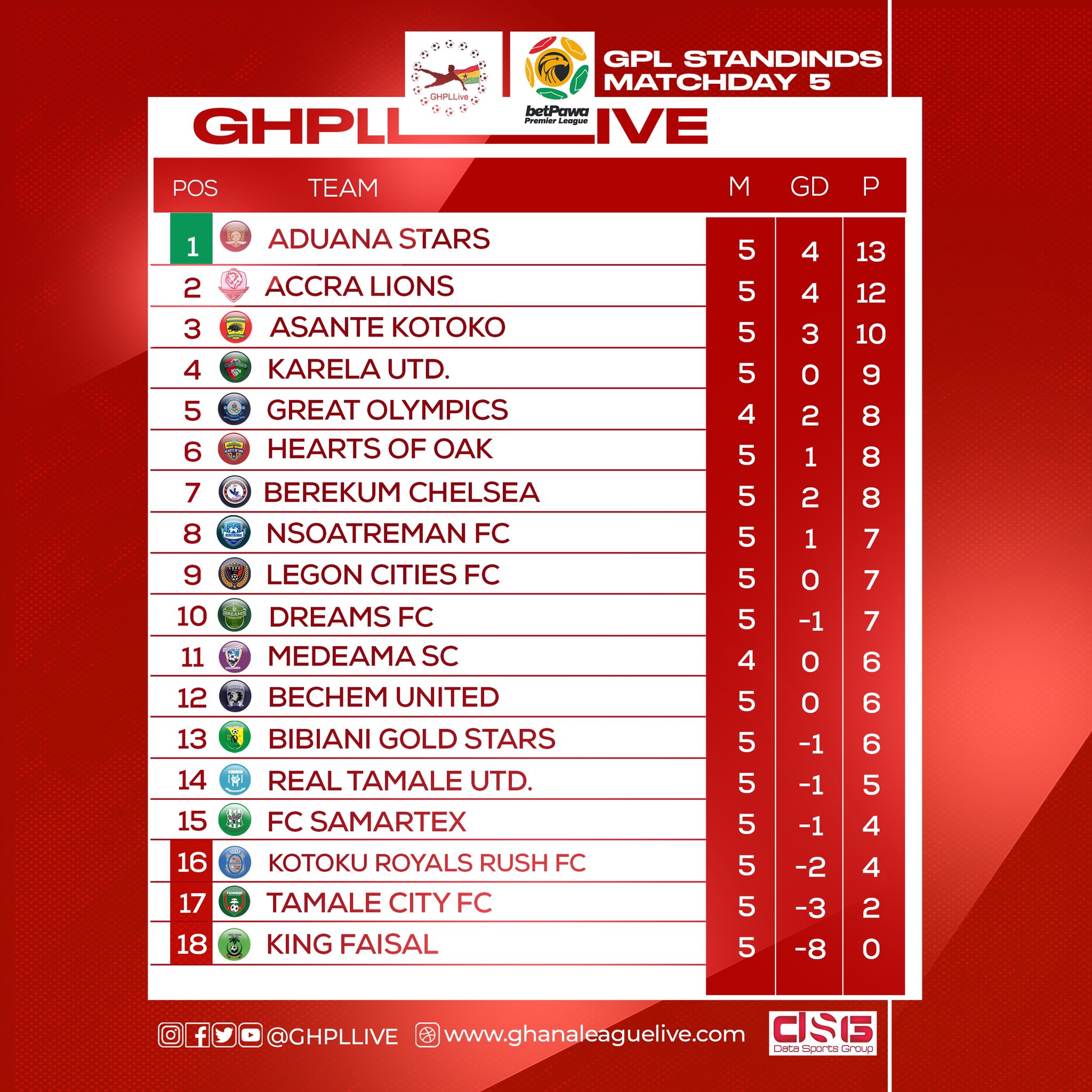