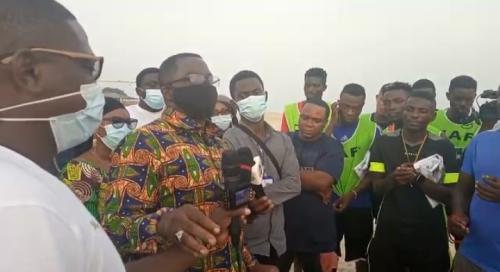 President of Ghana Olympics Committee (GOC) Ben Nunoo Mensah has pledged that the Committee will support the National Beach Soccer team the Black Sharks as they bid to make it to the Beach Soccer African Cup of Nations tournament.

The GOC President made this known when he visited the Black Sharks at their training base at Laboma Beach Resort as they count down to the first leg of the qualifier on March 27, 2021 against Uganda.

According to Ben Nunoo Mensah, the nation is behind the team and they will be supported to fly out to Uganda.

"You have to be in Uganda so whatever the GOC will do together with your management team with the GFA as well, to make sure that you will be able to get tickets, enough funds to go and represent Ghana will be done," he said.

Jerry Ahmed Shaib, Chief Executive Officer (CEO) of the Coastal Development Authority (CODA), who has been elected as the new President of the Ghana Weightlifting Federation (GWF) added: "Go and give us the medals, I have spoken to the GOC president and your management so whatever support there is for Beach Soccer will be given."

Meanwhile, captain of the Black Sharks Michael Sema has reiterated their desire to qualify and further win the African Cup of Nations Beach Soccer.

He added that, the Black Satellites' triumph in the just ended U-20 AFCON has motivated them.

â€œWe congratulate the Black Satellites, we are are very motivated by what they did. We also want to go out there and do our best to beat Uganda to qualify for the Afcon in Senegal. Even though we have not been playing regularly due to Covid-19, we are determined to give our best,â€ he said.