CAFCL: Kotoko vs FC Nouadhibou clash called off for the second time 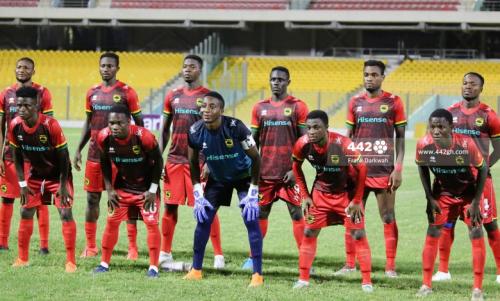 The CAF Confederation Cup second leg encounter between Asante Kototo and FC Nouadhibou has been called off again.

The which was supposed to come off yesterday at the Accra Sports Stadium was called off after some two players from the away side tested positive for coronavirus, with just some few minutes to kick off after COVID-19 results released.

The game was delayed for over one hour which forced the referee to cancel the game.

CAF later issued a release stating that the game should be played Sunday, December 6, 2020, at the Accra Sports Stadium at 3:00 pm.

However, the referee has once again called off the match today due to due to a medical-related issue on the part of the away side and after both teams failed to show up to warm after over 45 minutes.

The decision now lies with CAF to decide the fate of the two teams in the competition.

The Mauritanian side travelled to Ghana with 16 players for the game. Two players from FC Nouadhibou tested positive for COVID-19 twice (yesterday and today).