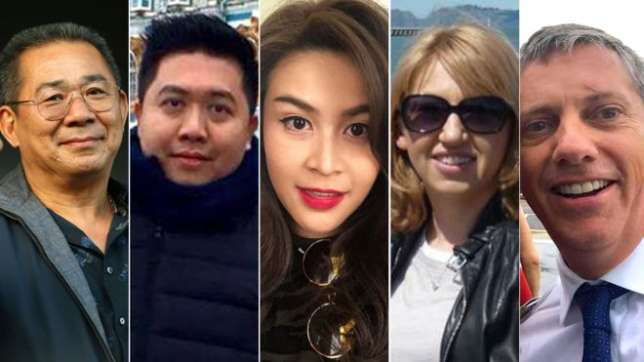 The cause of the helicopter crash that claimed the life of Leicester City's chairman Vichai and four others on October 27, 2018, has been revealed.

This caused the AW169 aircraft to turn uncontrollably to the right before it crashed near the King Power Stadium.

Media captionFootage showed the helicopter taking off moments before the crash

A public memorial for Mr Swaffer and Ms Lechowicz - who police said was a passenger at the time of the crash - is taking place at Guildford Cathedral on Thursday.

An inspection at the crash site found parts of a mechanism linking the pilot's pedals to the tail rotor had become disconnected and there was a "build-up of black grease" on one component.

The failure of the system led to the pitch of the tail rotor blades being changed "until they reached the physical limit of their travel".

The report stated: "The initiating cause and exact sequence of the failure that resulted in the loss of tail rotor control is being investigated as a priority."

Widely shared video footage of the helicopter's last flight, taken from inside the King Power Stadium, shows the AgustaWestland AW169 climbing normally for about 40 seconds before it pauses and goes into a downward spin.

The aircraft reached an altitude of approximately 430ft then crashed to the ground.

It was rapidly engulfed in a post-impact fire and all five people on board were killed.

Following the crash, the European Aviation Safety Agency ordered safety checks to be carried out on the tail rotors of AW169s and similar models.

At the memorial service for the pilots in Guildford, Ms Lechowicz's sister Kate paid tribute to the pair saying "they were just an incredible couple and amazing pilots".

"[They were] always there for their family and friends, ready to fly across the globe to be with us or anyone who would need it."

She said both had been excited at the prospect of becoming aunt and uncle to her son who is now 18 days old.

She said: "I wish you could meet each other. We have already applied for his passport, as you wished, so he can fly before he walks.

"You have touched the lives of every single person you have met... I know I am not alone in feeling a part of me is missing that never can be replaced."