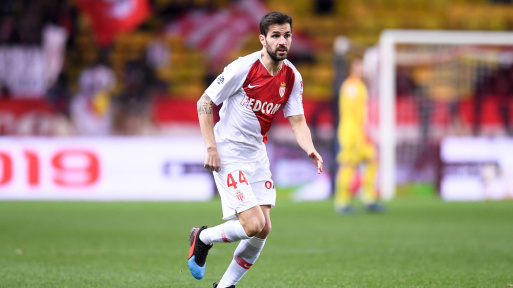 Monaco star Cesc Fabregas feels the 2019-20 Ligue 1 season may have been cancelled too soon amid the coronavirus pandemic.

Paris Saint-Germain were declared champions and Amiens and Toulouse were relegated after the season was called off last month, with most teams still having 10 games remaining.

As the Bundesliga prepares to restart on May 16 and the Premier League, Serie A and La Liga try to resume, Fabregas believes the Ligue de Football Professionnel (LFP) could have waited before ending the season.

"It was a big decision that was made and I can understand why they took it," Spanish midfielder Fabregas told beIN SPORTS. "But maybe it was taken a little too soon, considering a lot of the big league are still all trying to resume.

"Although I completely understand the meaning behind it and it's better to be safe in all accounts, because the most important is the families and the health security of everyone and support this 100 per cent.

"But maybe we could've considered individual training, where you have basically no risk. You're not touching anyone, you're not close to anyone. See if everyone was getting closer to football behind played all over the world.

"Obviously, it's very difficult and I understand someone needs to make decisions. We just have to do what they're telling us. Difficult moment in our professional lives and personal lives, but we just have to hold on and everything will be fine in the future for sure."

Monaco were ninth and nine points outside of the European qualification places when the season was called off.

Another major French football figure calling for the season to resume is Lyon president Jean-Michel Aulas, who has urged Ligue 1 authorities to reconsider, saying he is still hopeful that they may yet turn away from the "wrong path".

"We are on the wrong path, it may not be too late to try to imagine, in the light of what is happening everywhere in Europe, something that is politically coherent: we had until late August and maybe even early September to finish," the Lyon chief explained to L'Equipe.

“Until I receive the transcript of the minutes from the board of directors which decided to stop - I haven't had it since April 30, and it's strange."