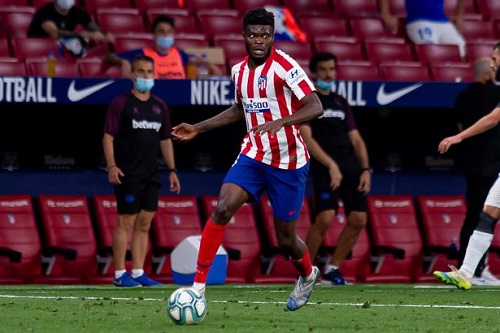 Thomas Partey has been urged to carry on his development at Atletico Madrid by Black Stars coach Charles Kwablan Akonnor.

The midfielder is having an incredible campaign with Diego Simeone's side having made 39 appearances in all competitions leading to transfer interest from Arsenal.

But the 27-Year-old has been advised by his national team coach Akonnor to continue playing with the La Liga side as he will have more minutes under his belt compared to a switch to the Premier League with Arsenal.

“With Arsenal, I’m not too sure,” Akonnor said before remarking, “Arsenal fans will kill me [for saying he should not join the gunners].”

“I hope that, and I’m sure money issues will come in, but I hope that whatever he asks for, Atletico will be able to pay,” he concluded.

Thomas Partey and his side are in action today as they take on German side RB Leipzig in the Portuguese capital in the quarter-final of the UEFA Champions League at 7:00 pm.

The midfielder would be expected to play a key role tonight if they have any hopes of seeing off the German side to reach the semi-final.