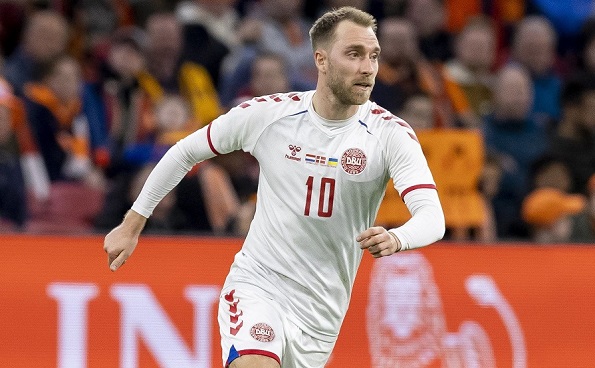 Christian Eriksen is the talisman of the Danish team
Shares

Denmark coach Kasper Hjulmand has kept faith with the players who delivered the recent successful World Cup qualifying and Nations League campaigns as he named 21 of the 26-man squad that will travel to the World Cup finals in Qatar on Monday.

The remaining five players will be revealed following the last round of European fixtures before the tournament and the final list must be delivered to FIFA by Monday November 13, with the World Cup set to get underway on November 20.

"Many things can happen," Hjulmand said. "It's unsolvable, but it's the right way to do it -- there are two games left for many of our players, and that can easily change things."

The squad was unveiled in a slick video that featured a reworked version of the Danish national anthem alongside Danish fans and well-known faces such as former striker Nicklas Bendtner and former prime minister Helle Thorning-Schmidt.

Hjulmand included captain Simon Kjaer and playmaker talisman Christian Eriksen, who has recovered fully from the heart attack he suffered in Copenhagen during Euro 2020, in a squad with no shortage of big-game experience.

Hertha Berlin goalkeeper Oliver Christensen, Leeds United defender Rasmus Kristensen and Eintracht Frankfurt forward Jesper Lindstrom are the only players that have not played at the finals of a major tournament for Denmark before.

"There are 10 or 12 players still in contention for the last five spots," Hjulmand said, holding the door open for the likes of midfielder Christian Norgaard and forward Yussuf Poulsen, who weren't included in the 21-man list.

The Danes will take on Tunisia, France and Australia at their sixth World Cup finals. They achieved their best result at the 1998 tournament in France when they reached the quarterfinals, where they lost 3-2 to Brazil.