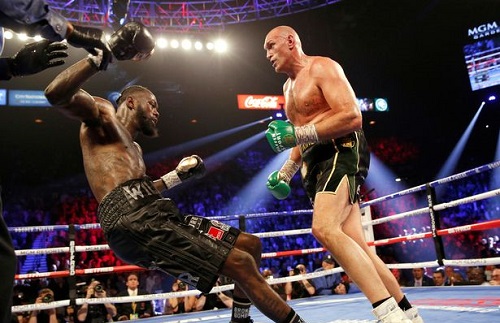 Tyson Fury's promoter Bob Arum has confirmed that a third fight between his client and American heavyweight Deontay Wilder will go ahead later this year.

The Gypsy King produced the performance of his career to beat Wilder in Las Vegas earlier this month following their controversial draw in 2018.

There was a contractual clause, however, that stated Wilder would have the right to trigger a third bout between the pair, and it appears the 34-year-old has opted to do just that, and it seems the rematch could take place in July, with a much-anticipated fight between Fury and fellow British heavyweight Anthony Joshua having to be pushed back to the end of the year.

As reported by Michael Benson via Ringside Reporter: "Bob Arum has declared that Deontay Wilder's team officially exercised their contractual clause for a trilogy with Tyson Fury last night. He said Fury vs Wilder III will take place in mid-July and they're open to a possible Anthony Joshua fight at the end of 2020."

The news may come as a disappointment to British boxing fans, who are desperate to see Fury v Joshua as soon as possible.

It is thought that Wilder was offered a huge step-aside package to withdraw from the rematch against Fury, but it seems as though he has refused to do this.

He took to Twitter in a video and said: "I will rise again. I am strong. I am a king - you can't take my pride. I am a warrior.

"We will rise again, we will regain the title. I will be back. We will hold our heads up high.

"I will see you in a few months, for the war has just begun."

Joshua, meanwhile, is lined up to face Kubrat Pulev as one of his mandatory challengers in June.